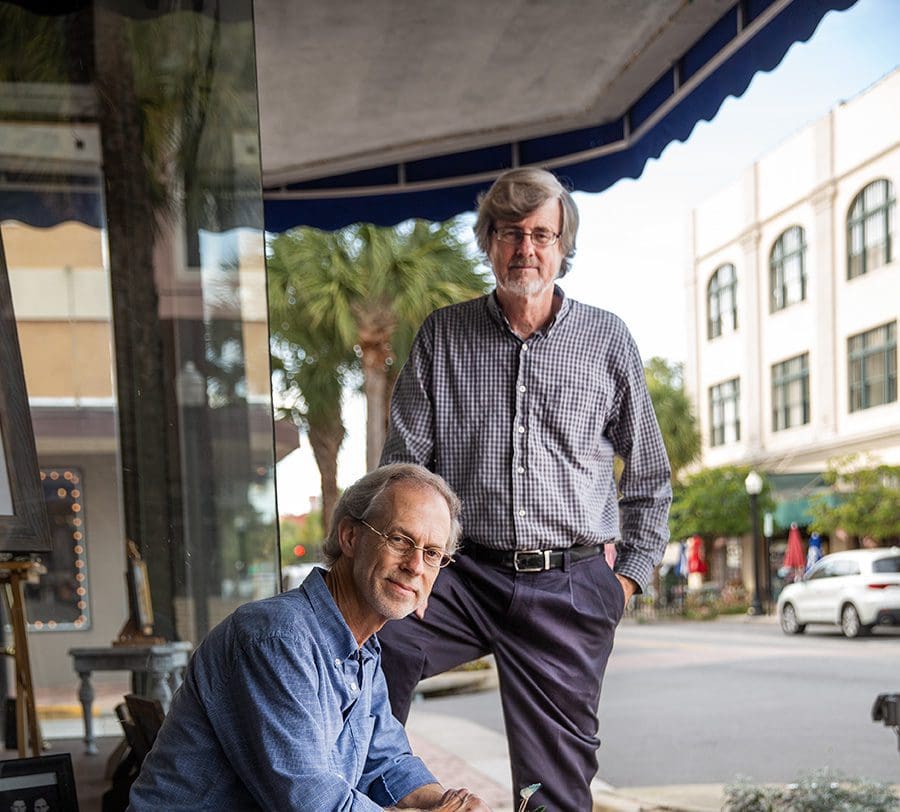 The Leggett brothers’ focus has always been on Leesburg.

When Marty and Myron Leggett reminisce about growing up in Leesburg, the conversation bounces from their Cherry Street home (now a retention pond) to the best tackler in a game of Capture the Flag (their dog) to jokes about who’s older (it’s Marty).

The brothers, who were born in Main Street hospitals and now work next door to each other on Main Street, have a lot of history to share. At least six generations of Leggetts have lived in Central Florida, and relatives on their grandmother’s side bought land in North Florida in 1826.

Their parents, Gene and Ginger, own the 138-year-old building where Marty operates an optometry office and Myron runs a photography studio—similar to childhood, when the brothers worked side by side at Dairy Ranch and mowing lawns.

Happenstance led them to visual professions. Marty got glasses at age 11 and saw the future. His mother asked him what he wanted to do with his life. Doctor? “I really didn’t like the blood and guts.” Attorney? “Nobody likes attorneys.” Veterinarian? “A dog might bite me.” Dentist? “Somebody might bite me.”

“So I said, ‘How about I do optometry?’” Marty says. “I thought it looked like a reasonable thing to do, you didn’t have to be out in the weather, so I stuck with it.”

Myron and his wife, Sandy, had a sign and screen-printing business, but in their 20s, they started photographing weddings for his parents’ business. He eventually transitioned to photography full time and developed his passion for painting portraits from photos.

“The emotional aspects of what I do, I enjoy a lot, as far as making people happy,” Myron says. “People never cried when they got a sign from me, but they cry when they get a photograph or a painting from me.”

Leesburg’s history is important to the brothers. In his office, Marty displays photos of the city’s early days. They remember going downtown to Sears, JCPenney, and Vincent’s dime store. City events have made Leesburg bigger and better for business, they say, but “downtown is still downtown” because many landmark buildings remain.

Some things never change—like the Leggetts’ connection to Leesburg.

“I never left because of family being here,” Myron says. “It was nice having family around and nice seeing friends that you grew up with, and I still see that. There’s still a lot of Leesburg graduates here.”

“It’s where we all grew up and what we all know,” Marty adds. “I wouldn’t go anywhere else.”