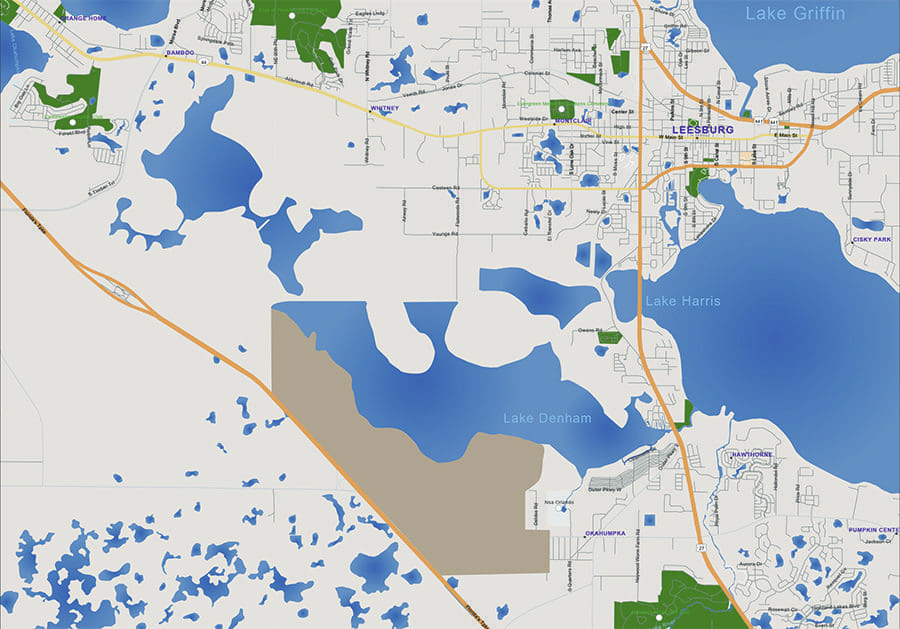 Retirement community moves into Leesburg with its newest development.

Running a city takes a lot of know-how: how to grow the economy, how to keep people safe, how to keep them secure and happy, and how to handle wastewater, among other things.

In fact, planning to handle wastewater while also growing its tax base were two reasons the city of Leesburg accumulated several thousand acres of land in its southern region more than a decade ago.

The land came in handy. According to Al Minner, city manager, in late 2016, when The Villages was planning expansion, the developer began talking with the city of Leesburg, population 22,419. In October 2018, a land purchase was completed that eventually will total nearly 2,000 acres in the southern part of the city. It will become the future Village of West Lake, to be completed within the next few years.

The gross sale price was around $7.9 million for the initial 1,127 acres at $7,000 per acre, Al Minner says. After reimbursements to the Environmental Protection Agency and other obligations, the net sales proceeds to the city is $4.5 million.

“We expect The Villages to start building some 2,500 homes within the next three years,” says the Leesburg city manager. “Our final evaluation is that we estimate the region will receive about $10.6 million in tax revenue, of which the city will net $2.6 million annually at buildout.”

Since the early 2000s, Leesburg planned for the 2,000 acres to be an industrial development near County Road 470. The city would create a multi-use complex for commercial growth to increase the city’s tax base while using the area for wastewater needs.

“I was hired to be city manager in 2014,” Al says. “I was given a list of things the city officials wanted me to accomplish. Among the list was selling the County Road 470 Master Plan project to manufacturing and other companies to come here and operate.”

“In the past dozen years, only one parcel of about 80 acres was sold to a concrete manufacturer who planned on bringing in about 50 jobs,” he says.

That was certainly not enough to fulfill the plans Leesburg had for the property. Things changed, though, when the developer of The Villages came calling.

“I began thinking that Florida wasn’t really a competitor for creating industry and selling widgets, that we were really more of a service economy,” Al says. “That’s what The Villages does so well. They create lots of jobs, their tax values are high, and they create lots of spinoffs.”

Tax numbers for the original industrial development plan were projected to bring in $250 million of tax-based income for the city, but not receivable until after the first 10 years. This was due to planned tax abatement credits, and only if all parcels were sold to successful manufacturers.

Now, following the land sale to The Villages, the expected gross income is predicted to be $750 million within the next three to five years.

“It was really a no-brainer,” Al says. “It was not difficult, therefore, to switch people’s thinking.”

Even so, it wasn’t simple to accomplish the sale.

“There was a lot of work involved to untangle this parcel. Most of the work came with a lot of due diligence on both sides. The property had been our effluent spray fields, and we had grant money (involved). So, we had to get a release on the property from the Environmental Protection Agency because there were some old covenants on it,” Al says. “We had to get a mineral rights release. We had to clear things through the Department of the Navy because of the bug spray facility. We had to rezone it. There were a zillion steps to be cleared to make this development happen.”

“There are two byproducts from wastewater disposal: sludge and effluent clear water. The latter is valuable for irrigation purposes,” Al says. “It’s not drinkable water, it’s not potable, and our city’s wastewater volume also wasn’t large enough to make it worthwhile to sell and ship it elsewhere. However, to The Villages, effluent water is very valuable because they have different needs.”

In the end, the sale of the land helped both parties.

“We used to just spray the clear water on our fields, but The Villages will now pipe it to their own areas for irrigation needs,” Al says. “And they will also send us their wastewater, which we will treat.”

There is another reason the sale worked.

“The Villages are the only ones who could both buy the property and take the effluent clear water. This is what actually opened up the property for development,” Al says. “It was too expensive for us to dispose of the effluent water any other way.”

The wastewater situation also was the reason Leesburg could not develop the property in the past.

“Now, The Villages (is) building a series of pipes to take our wastewater and send us theirs, which is another avenue of this deal,” Al says. “Unless someone knows about building houses, they don’t know about all these other things that have to be considered.”

While The Villages initially bought 1,127 acres, a sale of the remaining acres will come later this year.

“I had to hold some acreage back because I have to store a certain amount of wastewater for another 90 days,” Al says.

Al believes this is not only one of the biggest economic development opportunities for the city of Leesburg but also for the entire region. His enthusiasm for the development is contagious.

“I mean, Lady Lake has been gangbusters with The Villages growth and Fruitland Park was a humongous asset for Lake County,” Al says. “This deal is equivalent to those. I think it’s going to be a net positive for us in revenue. It’s amazing tax growth and job creation.”

He refers to the increase in the service economy with the need for more restaurants, health-care professionals, teachers, and, during the construction phases, contractors, painters, plumbers, electricians, concrete workers, manufacturers of materials, and more.

“I think it’s a coup for the city,” Al says, “especially since our original plan for industrial growth never came.”

In the end, the financial impact to the city will benefit schools, city services, and the entire population as the city is revitalized with the increase in tax revenue.

“Everyone knows The Villages does a marquee job in everything they do,” Al says. “They do it first class, and now Leesburg is going to reap the benefits of that. I couldn’t be more excited. I think we’ve made a great partnership and I’m excited to see it finally start.”