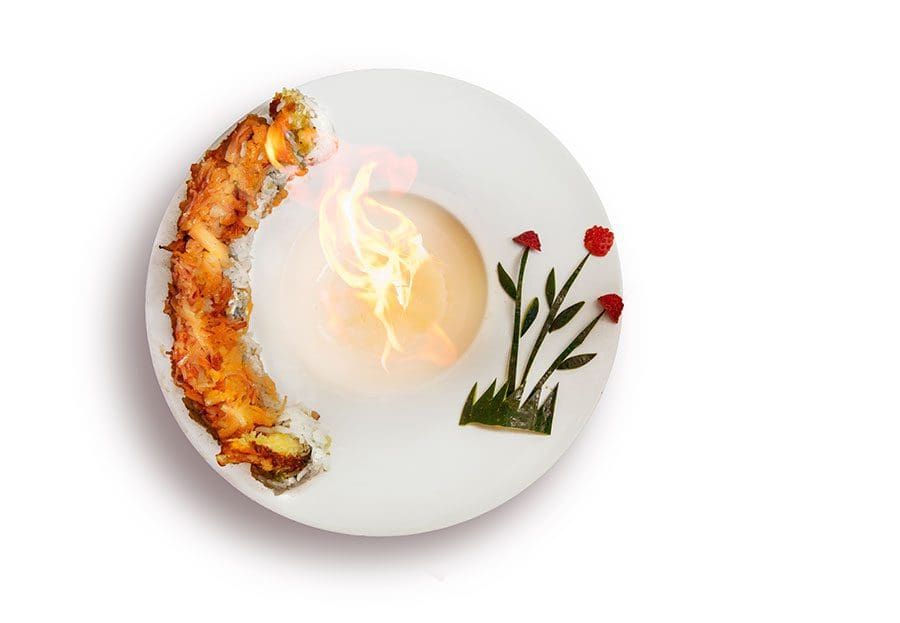 An essential phrase to the Japanese, Itadakimasu means “Let’s eat,” or “Thanks for the food.” You’ll be saying both at Ikaho.

Ikaho Sushi Japanese Restaurant in Groveland has a tasty and varied menu. With everything from sushi and sashimi to shrimp tempura and hibachi salmon, you’re bound to find something that suits your taste buds.

The atmosphere is warm and inviting with the Happy Cat sitting on the counter waving as you enter. Happy Cat, or Maneki-neko, is said to bring good luck to the owner, and since the food we had was so delicious, I’m pretty sure it’s true.

My two companions and I went for different entreés on the menu. James enjoyed the sushi while Theresa had teriyaki chicken, and I had hibachi chicken.

Our meals began with a house salad and clear soup, which we all enjoyed. Then came James’ Volcano Roll. He’ll tell you about the taste, but I can tell you it was one of the most exciting and beautiful presentations of a dish I’ve seen. The roll was nestled along the side of a deep bowl garnished with thinly sliced strawberries and cucumbers and in the center of the bowl was a beautiful flame. Hear about this great dish in James’ own words:

Fire in the hole!

Or, in my case, fire near the roll.

Yes, a fire shimmered in the middle of my bowl as my Volcano Sushi Rolls were served. Sliced cucumbers and strawberries added to the artful presentation. Thin strips of sweet pickled ginger, a staple in Japanese cuisine, also came with the meal.

But the creativity isn’t limited to presentation only; the sushi was every bit as tasty as it was visually appealing. My Volcano Rolls came with shrimp tempura, avocado, and cream cheese and were topped with spicy scallop and kani. The fried shrimp gives this roll added texture and provides a little bit of a crunch with each bite, which differs from other rolls I’ve tried. I also added a conservative amount of wasabi to each roll, and if you use it in moderation, it will keep your sinuses from exploding.

I’ve eaten sushi at numerous venues around Central Florida, and I have to say that the Volcano Roll at Ikaho Sushi ranks right up there with the best of them.

Theresa’s teriyaki chicken is a perfect dish for the light eater in the group. The chicken was thinly sliced and accompanied by white rice and a vegetable garnish. Since she took part in the Business Wellness Challenge and met her goal, she’s keeping her girlish figure!

My hibachi chicken was tender and delicious, cooked perfectly to go along with the mixed vegetables and fried rice, and the Yum Yum sauce was (I can’t resist!) yummy. OK, I admit it, I cleaned my plate.

Ikaho Sushi Japanese Restaurant has been in Groveland for seven years. It’s at 7965 State Road 50, #900, in a Publix strip mall. Along with the friendly and courteous staff serving promptly and efficiently, the behind-the-scenes food preparers make the meals look as appealing as they taste.

The restaurant is open from 11am-3pm Monday-Saturday for lunch, and dinner hours are 4:30-10pm Monday-Thursday and 4:30-10:30pm Friday and Saturday, with Sunday hours from noon-9:30pm.