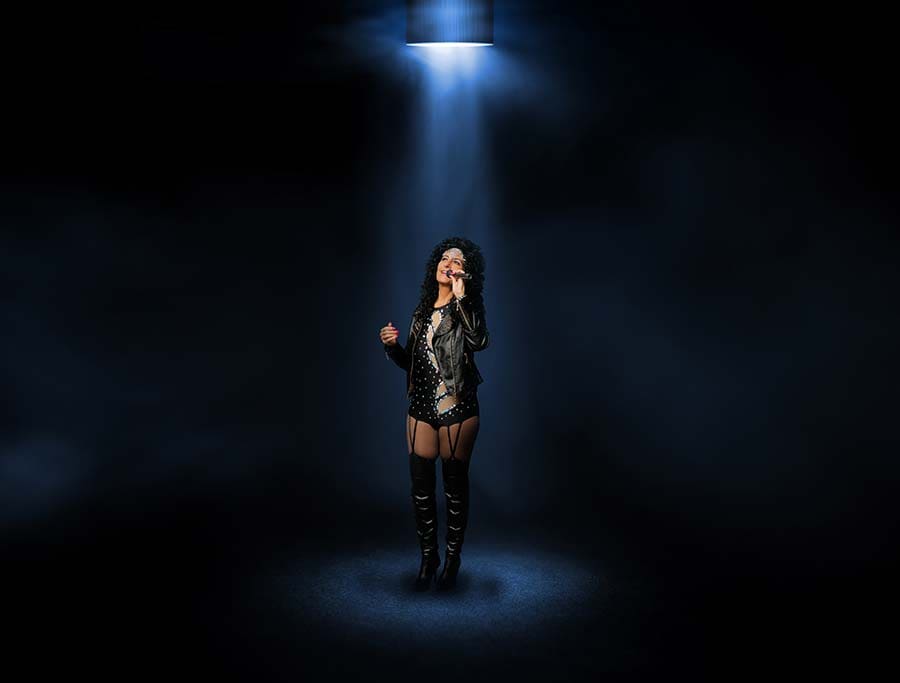 Georgianne Hill turns heads when she walks into a room. Her long black hair falls to her waist and her mannerisms and voice have caused numerous people to ask the No. 1 question she has been asked for years: “Are you…?”

She quickly interrupts to reveal she is NOT legendary pop singer Cher.

“All my life and at nightclubs and on cruise ships people say, ‘You look like her,’ and I get comments of ‘You sound like her, and you act like her,’” says Georgianne, 66, a Villages resident who embraces resembling her look-alike and bills herself as “a Cher tribute artist.”

She entertains at social clubs and Savannah Center shows, and the Buffalo, New York, native enjoys portraying Cher and singing “All I Ever Need Is You,” “If I Could Turn Back Time,” and other hits Cher has crooned over the decades.

“I’ll bring a gentleman up onstage to sing, ‘I’ve Got You Babe,’ and they love it,” she says of audiences. “They go crazy over it.”

Even though Georgianne has had long black locks since 1972, she didn’t begin singing until she moved to The Villages in May 2011.  A friend encouraged her to enter the Sunburst Convention of Professional Celebrity Impersonators in Orlando as a Cher look-alike, and that was the start of it all for her. Georgianne joined professional singer Gene Ferrari in Las Vegas as they sang for a show.

“It has been an explosion ever since. This is taking me where I never expected to go,” Georgianne says.

She also has a short-hair wig that she wears to separate herself from always looking like Cher, but that wasn’t the case March 23 when Georgianne was in Washington, D.C., to see Cher in concert at the MGM National Harbor.

“I had my hair down and she noticed me,” Georgianne happily recalls. “Every time she came out with a new outfit, she would look down and I’d smile, clap, and give two thumbs up. She always looked at me first, and I guess to see how I liked her outfit, and that was exciting for me.”

She believes Cher made about 10 costume changes during the show.

“When I watch her, we are like twins,” Georgianne says. “She is doing motions onstage like I would do, and it’s just automatic, and I think, ‘Oh my gosh, she is like my twin!’”