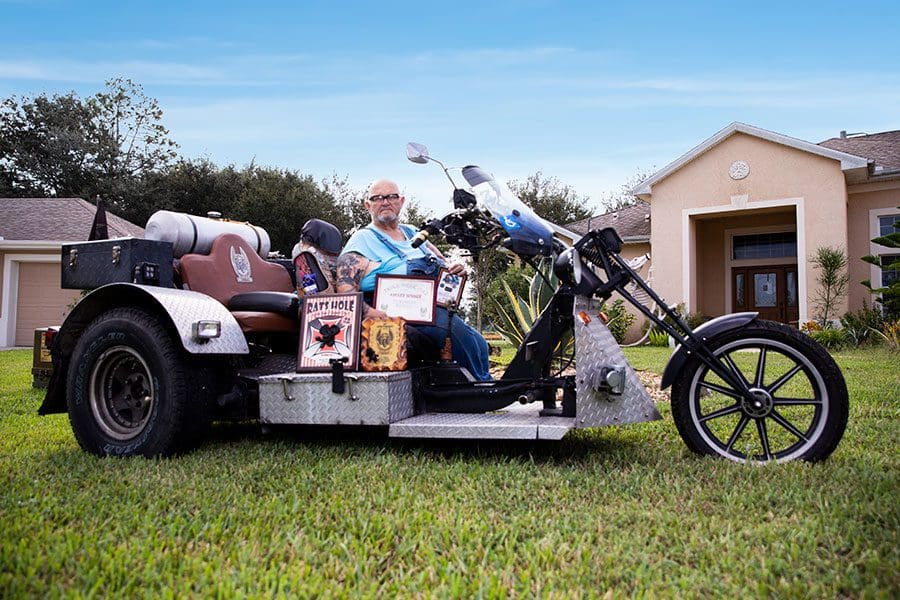 How did you earn the nickname “Tiny”?
When I played high school football, I was an offensive lineman who weighed 350 pounds. My teammates jokingly referred to me as Tiny, and the nickname has stuck over the years.

How did you get into motorcycles?
At age 15, I built my first motorcycle out of a frame, two wheels and a box of parts. It was a Harley Hummer.

What are you riding now?
I’m now riding a Volkswagen Trike, which I built in 1984. I have 200,000 miles on it and over the years have put two transmissions and three engines in it. I have been all over the country on that trike, and when I’m riding it, people often take pictures of me going down the road.

Why do you prefer a trike over a motorcycle?
A trike has three wheels, and when you’re older like me, it’s nice to stop at a red light and not have to worry about balancing a 600-pound machine. That’s particularly beneficial for me because I have two artificial knees.

Where have you traveled on your bike?
I’ve been to the Sturgis Motorcycle Rally twice, and that’s a spectacular event. I’ve also been to Canada and California and everywhere in between. I’ve taken the trike to several shows and won first place. Back in 2002, I went to a national trike event in Arkansas and finished in second place out of 500 entries.

Tell us about Road Dogs’ charitable work:
Our next event is going to be Oct. 26. We’re going to do a pink bra ride to raise awareness about the Greater Clermont Cancer Foundation. We’ll ride from Clermont to Tavares.