Monument of Groveland Four to be unveiled at Lake County courthouse

Monument of Groveland Four to be unveiled at Lake County courthouse

Four African-American men will be remembered forever for the injustices they faced in a 1940s criminal case in Lake County.

A monument dedicated to the Groveland Four will be unveiled at 10:30am Friday, Feb. 21, on the lawn of the Lake County Historic Courthouse.

The public is invited to join Groveland Four family members, community leaders and elected officials for the ceremony. Gary Corsair and Gilbert King, who have written about the Groveland Four in detail, will be in attendance to share remarks. State Rep. Geraldine Thompson also will speak at the event, according to a news release.

The monument honors the four men—Charles Greenlee, Walter Irvin, Samuel Shepherd and Ernest Thomas—who, in 1949, were wrongfully accused of raping a white teenage girl in Groveland. In January 2019, the men were posthumously pardoned by the Florida Clemency Board, which noted that their convictions and treatment were a “miscarriage of justice.”

The granite memorial will feature a bronze plaque imprinted with a written account of the men’s ordeal, which was prepared with the help of their families. According to news accounts, Ernest was shot and killed by a posse of men shortly after the alleged crime, and Samuel was later killed by Lake County Sheriff Willis McCall. Charles and Walter served more than 10 years in prison before being paroled.

“While we cannot change the past, we can learn from it, and we can assure that our institutions today provide equal and fair justice to all,” Lake County Commission Chairwoman Leslie Campione says in the release. 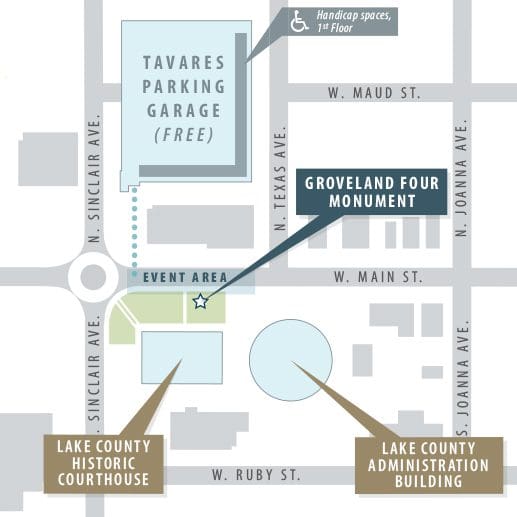