Sadie At Your Service 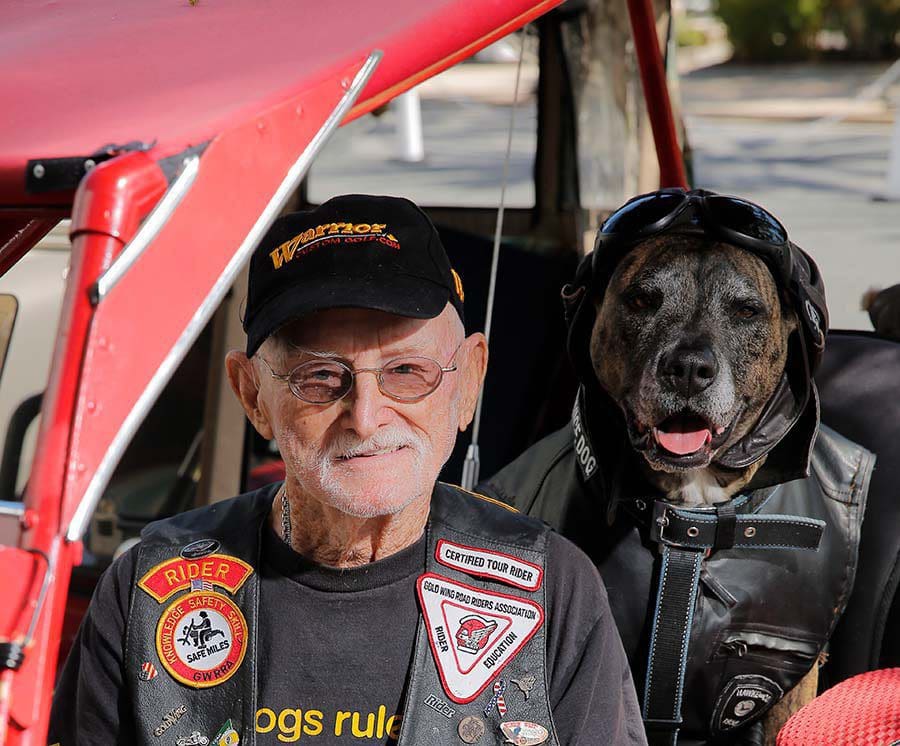 Sadie At Your Service

Villager Fred Martin travels through life with a constant companion, a beloved dog that turns heads and helps Fred keep his head together.

A familiar sight to many Villagers is parked outside City Fire restaurant at Lake Sumter Landing. This crowd pleaser is perched comfortably on a Honda Gold Wing and dressed in motorcycle gear, complete with a leather helmet and goggles.

That’s Sadie, and she’s a dog.

“She’s quite well-known in The Villages,” says Sadie’s human companion, Fred Martin, of the Village of Poinciana. “In fact, everybody knows her, nobody knows me. They’ll say, ‘Hey, Sadie,’ when they walk up to me. All the women go crazy for her.”

Fred, who will turn 90 in June, does the actual driving of the Gold Wing. Sadie’s just along for the ride, wherever Fred wants to go, near or far. Most days, they go to Lake Sumter for a beer and water—Fred has the beer.

Beyond the cuteness of the scene, however, Sadie provides a valuable service to Fred. He’s raised 7-year-old Sadie since she was a pup, and says he had her certified several years ago as a service dog to give him emotional support.

“She’s my therapy. She’s my anchor. I mean, I don’t know if I could get through a day without her. That’s how much she means to me,” Fred says. “It’s like an emotional thing. I get edgy when I’m not around her. It’s hard to put into words, but she’s my anchor.”

Fred, who’s been married three times, lives alone and has two daughters, Suzanne Shirley, in Ocala and Mary Ann Williams, in Miami. Sadie coexists happily with a recent addition to the household, Morris, an orange tiger cat named for the finicky star of cat food commercials in the 1970s.

Sadie accompanies Fred everywhere, including on the road, harnessed into a seat behind him on the motorcycle.

“We’ll be on the road sometimes eight or 10 hours. Never complains. She just loves to ride,” he says.

Sadie has about 10,000 miles on her—that’s 70,000 in dog miles—and their most recent big trip was for 11 days last summer to Billings, Montana. They attended Wing Ding 38, a festival run by the Gold Wing Road Riders Association. They plan to hit the next Wing Ding this summer at Grapevine, Texas, and they’ve also traveled to Canada and the Keys.

The dog sits so still on the bike, some drivers mistake her for a stuffed animal, Fred says.

“She trained herself. I didn’t do it,” he says.

Sadie, a mix from a red-nose pit bull mother and a mastiff father, has trained herself in other ways as well.

“The second day going to Billings, she kept tapping me on the back,” Fred says. “I said, ‘What’s the matter?’ So we pulled into a rest stop and she ran right to the rest area for the dogs. After that, when she had to go, she would tap me on the back and we would pull into a rest area. She’s a wiz. I’ve had a lot of dogs in my life, but this one here, she’s as smart as a whip.”

At the festival, Fred won awards for oldest rider and longest distance traveled. Sadie did well, too, with a feature in the local newspaper and requests for photos from numerous motorcyclists.

“Even in the motorcycle crowd, she’s quite a girl,” Fred says. “If I had a penny for every photo that she’s had taken, I could drive a Ferrari.”

Sadie attracts fans on the road, too, as motorists often follow the pair to gas stations or rest areas to get a closer look at her.

“At one gas station, the guy that owned it came out and asked me if I could move my bike because I was jamming his pumps up,” Fred says. “People were getting out of their cars and taking pictures of her.”

It’s the look that does it. When Sadie’s in her leathers and goggles, Fred says she resembles Amelia Earhart—a tribute for Sadie, not so flattering for Amelia.

“She just draws people,” Fred says. “I should’ve named her ‘Smiley,’ because you can even tell with some of the guys who are real sourpusses, by the time they leave her, they’re smiling.”

The relationship between Fred and Sadie is unlike any that neighbor and longtime friend Tom Bennett has seen.

“She just thinks the world of him, you can tell, and he does, too,” Tom says. “They’re so compatible, it’s hard to believe. I’m 77 and I’ve had a lot of pets, but I’ve never seen any dog who has the kind of relationship that she has with him.”

But this bond between man and man’s best friend almost didn’t happen.

Fred’s previous dog was a big American bulldog named Bandit, who used to ride around in a cargo trailer behind a scooter. But after Bandit died, Fred was heartbroken and swore he wouldn’t get another dog.

“It’s a very traumatic thing to have to put a dog down that you’re really attached to, and just about everybody you talk to says the same thing: ‘I’m not going to go through that again,’” Fred says. “But after a while, you realize, they need you as much as you need them, because if you don’t take them, they’re going to put them down.”

Enter Sadie. Tom recalls that one of Fred’s daughters called Fred to see if he would be interested in a rescue dog. He agreed to take a look at the pup and, naturally, took her home.

“He’s so kind-hearted to animals,” Tom says. “He sensed Sadie was going to be a good dog. That was a big inspiration to him. And she was a great dog.”

Eventually, Fred became so attached to Sadie, he didn’t want to be separated from her on the road.

“She’s my companion,” he says. “Maybe it goes with age, I don’t know, but sometimes you get the feeling that you’re all alone, you know? It’s a mental thing, I know. I even look for her at night. If I don’t feel her next to me on the bed at night, you know, it’s stuff like that.”

Fred likens his anxieties to those of someone with post-traumatic stress disorder, or PTSD. He served in the Merchant Marine during World War II. Originally from Canada, as a teenager he joined the Canadian Seamen’s Union, which lent him to the Norwegian government. He served on a Norwegian tanker in the Mediterranean, and he said he initially had a fear that the tanker would be blown up.

A dog like Sadie, who is shy, calm, and quiet, can have a soothing effect on someone with anxiety. Studies have shown that touching a dog has a healing power because hormones such as dopamine and beta-endorphin are released in the individual, according to healthfitnessrevolution.com.

Sadie provides many other benefits. She’s a 24-hour companion who gives Fred affection and unconditional love, helps him stay active, and increases his social interaction. And, though she is “lovable,” Sadie also is very protective of Fred, Tom says: “I don’t think you would want to grab ahold of him or try to enter the house. She might chew your arm off.”

Fred moved 11 years ago to The Villages from Miami, where he lived for more than 60 years and worked as a carpenter. When he’s not riding with Sadie, he loves to play golf and billiards. He started riding a scooter when he was 16, and now is on his third Gold Wing, which he converted to a trike for better stability.

When Fred says, “Ride,” Sadie runs out the door and jumps up onto the motorcycle, which is loaded with a stereo, cruise control, a solar panel to charge the battery, and a specially made, adjustable canvas roof. The roof came in handy on last summer’s Montana trip, which was a rough ride because of high winds, rain, and fog.

Fred wasn’t sure he’d try to make it to this year’s Wing Ding, but he’s planning the trip. And Sadie will be by his side every mile of the way.

Animals provide support to owners in many ways

Several organizations in Central Florida provide dogs to people who require them for a variety of reasons, and these animals are categorized by the services they provide.

According to the American Disabilities Act National Network, an online guide, the classifications include:

Trained to work or perform tasks for a person with a disability, including a physical, sensory, psychiatric, intellectual, or other mental disability. This includes guide dogs for the visually impaired, signal dogs for the hearing impaired, psychiatric service dogs that detect the onset of psychiatric episodes and lessen their effects, seizure response dogs, and sensory signal or social signal dogs to assist autistic people.

Often used as part of a medical treatment plan to provide companionship, relieve loneliness, and sometimes help with depression, anxiety, and certain phobias.

Canine Therapy Teams of The Villages

is a group of Villagers, each with their own therapy dog that visits nursing homes and hospice centers to improve the well-being of patients as they greet and pet the dogs. The organization has 75 dogs, and the teams visit 25 facilities in and around The Villages, says Howard Horwitz, coordinator of the group.

Any dog that has a good temperament and can pass necessary testing can become a therapy dog, he says.

“A therapy dog started as a pet and was trained to serve a whole group of people,” Howard says. “They’re not limited to an individual.”

Service dogs, on the other hand, are trained to serve one individual exclusively, he says.

“Each serves a positive purpose,” he says.

Mary, a dog trainer for 30 years, tells members upfront that while the service dogs never will be taken away from them, they should strive for the day when the dogs are merely family pets.

“Our goal and hope for each of them is to become independent and not have to have the dog,” she says. “The longer they have the dog, the more comfortable they get. It’s little steps. Every veteran goes at their own level.”

She says the physical and mental benefits of having a service dog are numerous: they can help lower their owner’s blood pressure, calm anxiety, help them socialize, pull them back from flashbacks, wake them from nightmares, turn lights on, dial 911 on a modified phone, help put clothes on, help brace someone if they’re about to fall, and even anticipate seizures in epileptics and detect sugar-level changes in diabetics. 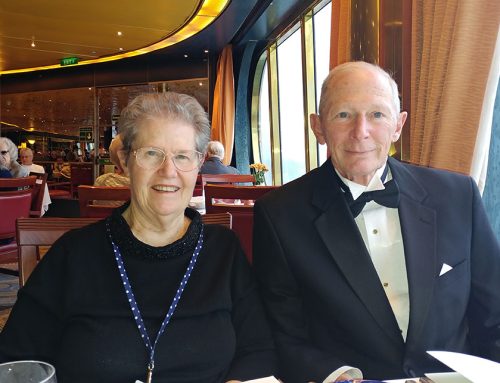 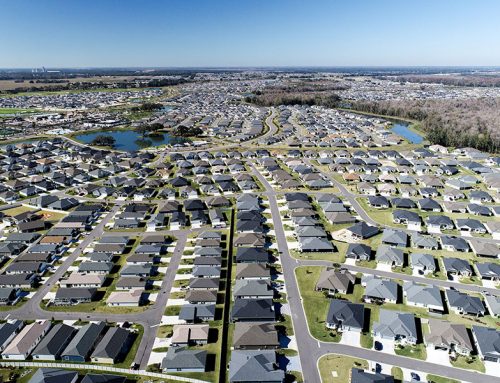 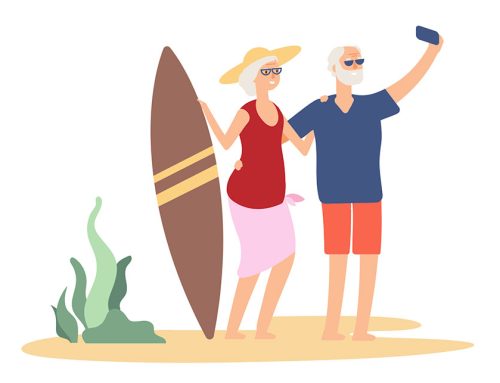