This N’ That: Shocking! Titillating! Mind-blowing! 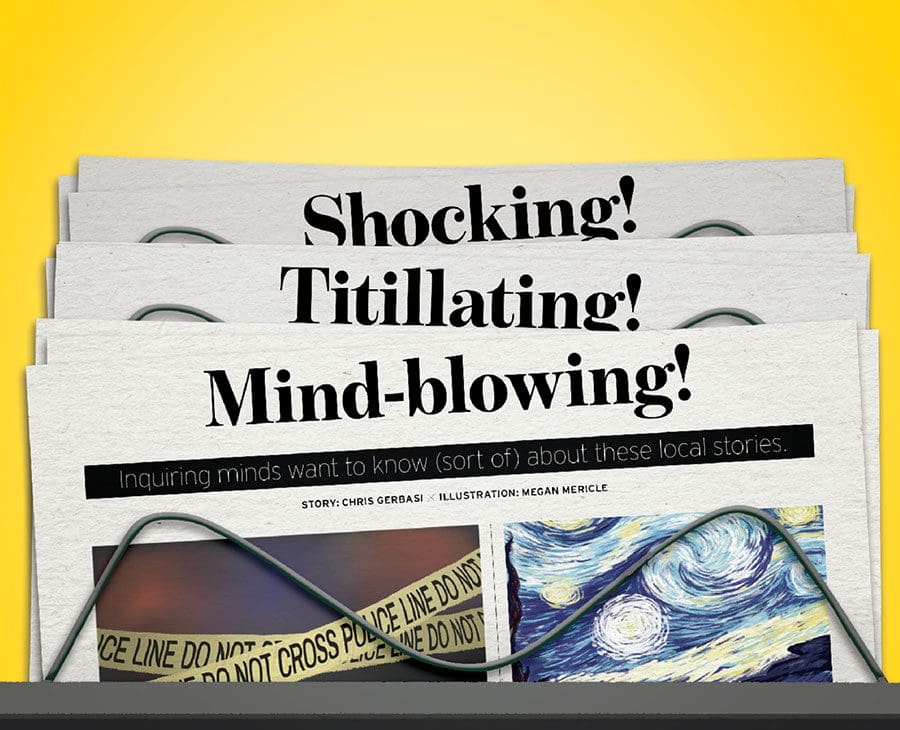 This N’ That: Shocking! Titillating! Mind-blowing!

Inquiring minds want to know (sort of) about these local stories.

Everything must go! The National Enquirer is selling thousands of secrets, bizarre tales, and three-headed calves. Amaze your friends! Shock your neighbors! Blackmail your congressman! Never-before-seen stories and photos are going for low, low prices. How can we afford it? Because we’re CRAAAZY!

Yes, it’s true. The National Enquirer was sold recently, according to news reports, but not before enterprising Enquirers made some quick cash. The Akers Media Group was all over it, outbidding competitors on eBay for the rights to local stories that, for various reasons, had never been printed before. Now, for the first time, these “true stories” finally can be told. (Advisory: Readers with pacemakers, weak bladders, or good taste may find this content disturbing.)

An innocent bet among friends ended in tragedy when a Clermont man died after accepting a dare to watch Ellen DeGeneres’ “Game of Games” TV show. The victim, identified as Bud Schlupp, repeatedly screamed, “Please make it stop! She’s killing me! She’s killing me!” as his friends laughed, pinned him down, and failed to take his pleas seriously.

“Sure, it’s good, clean fun till someone gets hurt,” a police spokesman says.

A Bushnell farmer is as happy as a pig in slop after marrying his favorite dairy cow. “My friends always told me, ‘Why buy the cow when you can get the milk for free?’” Emmert Bopkins says. “But I just fell in love with Elsie’s big brown eyes. The only drawback is I have to sleep standing up in a field. The local kids keep tipping me over, darn rascals.”

Emmert dismissed accusations that he married Elsie for her inheritance as the descendent of Borden Dairy’s famous Elsie the Cow. Elsie is a cash cow, however, and somehow will wear the pants in the family. Emmert also expressed no fears that his lactose intolerance would spoil the couple’s honeymoon, which is expected to last until the cow comes home.

The community that wasn’t there

After 40 years of leaders declining to comment to the outside world, The Villages ceased to exist today. Leaders could not be reached for comment. Sources inside The Villages who spoke on the record before being bound and gagged say the former community plans to become one giant Zumba class. Earlier reports that The Villages had been swallowed by a massive sinkhole appear to be unfounded.

In an unrelated incident, a map at a construction field office in Wildwood has become a curious attraction for religious zealots. A coffee stain on the map spreads outward from The Villages in the shape of the face of the deity known as “the Developer.” Calls to The Villages, naturally, were not returned.

A Leesburg woman was charged with six counts of first-degree murder and one count of attempted murder in what police are describing as a “love octagon” turned deadly.

Myrtle Lee Shushbomb, 45, had simultaneous relationships with seven men up until they found out about each other and threatened to make her do all of their laundry. The prolifically promiscuous perpetrator then killed six of the men by poisoning a six-pack of beer, according to police. The seventh man escaped when Myrtle Lee ran out of beer.

“I never was good at math,” Myrtle Lee told detectives. “I should’ve sprung for the 12-pack.”

Is paint job a snow job?

A maintenance man washing graffiti off a wall in Mount Dora uncovered what appears to be artwork by Vincent van Gogh. A local art appraiser, Sammy van Gogh (no relation), declared the painting “priceless.”

Artisans’ enthusiasm was tempered by the lack of evidence that van Gogh, who died in 1890, ever visited Mount Dora despite its reputation as an artsy boutique community. Van Gogh, of course, loved antiquing. City merchants were undeterred, creating T-shirts, mugs, and trinkets reading, “Van Gogh Shopped Here.”

As Sammy says, “Never let the facts get in the way of a good story.”