TV is for everybody 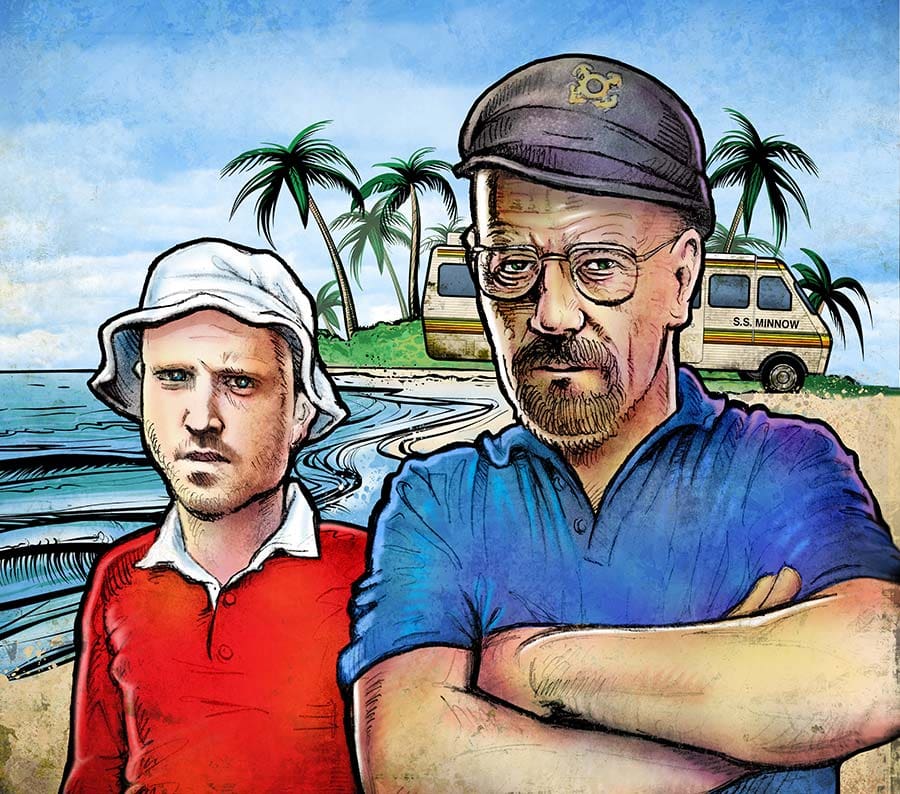 TV is for everybody

And the Emmy goes to… Gilligan’s Island Breaking Bad

Fifty-seven years ago, the chairman of the Federal Communications Commission made national headlines when he said that American television programming was a “vast wasteland.” In addition to earning himself a permanent spot in Roget’s Thesaurus, FCC Chairman Newton N. Minow rattled the television industry.

The TV moguls grumbled and branded his words an elitist attack on programming that viewers enjoyed. The wrecked ship on “Gilligan’s Island” was named the S.S. Minnow as a sarcastic slam at Minow.

Many people agreed with Minow, and what was true at the time of his speech in 1961 is still true today. Face it, most TV programs stink. There is, of course, a solution. And, yes, of course, you’re going to hear about it here.

We can figure that all TV shows are 50 percent good. The simple answer is to combine two existing shows into one and you get 100 percent good. Simple, huh? In addition to combining current shows, it is also acceptable to involve old shows.

“The Walking Dead Good Doctor”—In this heart-warming story, a young doctor shows incredible medical skills as a surgeon and at diagnosing illnesses. However, the good doctor himself suffers from a medical condition—meaning he is dead and has become a zombie. Despite this handicap, the doctor is highly successful treating his patients. Unfortunately, none of them live very long since the good doctor has a habit of eating their brains.

“How to Get Away with Murdering the Muppets”—A brilliant and crafty lawyer takes on the enormous challenge of trying to defend a sleaze-ball who murdered most of those cuddly, fuzzy Muppets. The shifty lawyer focuses her attention on defending her sleaze-ball client for the murder of Oscar the Grouch, hoping the jury will focus on the nasty Grouch and forget about sweet old Elmo, Bert, Ernie, and Cookie Monster.

“Designated Survivor Survivor”—An insignificant member of the president’s Cabinet, the secretary of something or other, becomes president when terrorists wipe out everybody in Washington, D.C., except the Washington Redskins. (Nobody messes around with the National Football League.) The nation is not happy with the presidential succession rule and demands that the new president prove himself by facing various competitions on a desert island with a bunch of hot-looking hard bodies in skimpy clothing. The president is about to be voted off the island when a bunch of CIA guys show up and all the hard bodies mysteriously disappear.

“I Love Lucy’s American Idol”—This new show combines a hit of the past with a current hit. Wacky and lovable Lucy convinces the producers of “American Idol” to tape the show in her apartment. Of course, Lucy finagles her way into being a contestant on the show. She dresses up like a banana and sings Carmen Miranda songs. Neighbors Fred and Ethel pop in occasionally for no apparent reason but win applause anyway. The highlight of evening is when husband Ricky comes home and shouts, “Lucy, you got a lot of ’splaining to do about all those cameras and that stupid banana outfit.”

“Bowling and Dancing with the Stars”—A bunch of professional bowlers from ESPN join the usual collection of B-listers, has-beens, wannabes, and never-weres in a dancing competition. This differs from the current show in that the bowlers are constantly aiming at the dancers. Wiping out both dancers is a strike; getting one is a spare.

“60 Minutes This Is Us”—Though highly successful, “This Is Us” is the slowest-moving show in the history of television. Husband Jack died suddenly and quickly from a heart attack, but it took him two seasons and a zillion shows to get it over with. The kids grow up one week, then they’re young again—over and over and over. In the new format, the entire, protracted story of the Pearsons is covered in one hour, freeing us for more worthwhile entertainment ventures, like watching cat videos on Facebook.

“Gilligan’s Island Breaking Bad”—Two old shows are resurrected and combined. After the S.S. Minnow is shipwrecked, Gilligan discovers the Professor has a solid knowledge of chemistry. Backed by money from the millionaire and his wife, Gilligan and the Professor develop a huge meth lab. Ginger and Mary Ann frequently jiggle in and out of the picture to boost ratings. Unfortunately, since no one else is on the island, there is little demand for Gilligan and the Professor’s meth. Finally, they realize they can market their product on eBay. They all live happily ever after.

The new Golden Age of Television has arrived!