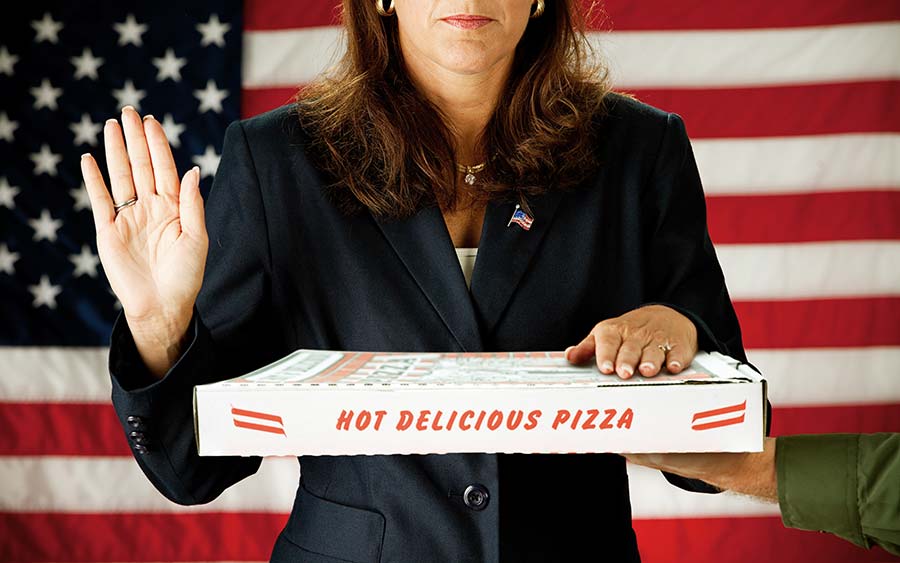 You never can have too many secretaries of whatever.

Forget about “E Pluribus Unum” and “In God We Trust,” the real motto of the United States is “More Is Better.”

This obviously means we need to have more members of the president’s Cabinet. George Washington had only four members of his Cabinet, but with that $27.50 federal budget, that’s all he could afford.

All four of Washington’s Cabinet members did a pretty good job, in particular Secretary of the Treasury Alexander Hamilton, who moonlighted and wrote a hit Broadway play. Later, when he was president, Washington’s Secretary of State Thomas Jefferson made the Louisiana Purchase, which included the French Quarter. That, alone, made him a hero. Secretary of War Henry Knox didn’t fight any wars, but he had lots of gold, and Attorney General Edmund Randolph probably did something cool although no one knows what it was.

With “more is better” in mind, we now have 15 Secretaries of Something or Other in President Donald Trump’s Cabinet, along with a handful of other fine folks who head up various departments but don’t have the “Secretary of” title.

But aren’t we overlooking some important areas? Aren’t there plenty of other vital parts of American life that warrant having a Cabinet position?

These, to name just a few, should be part of the president’s Cabinet:

Secretary of Fur Babies: As a nation, we spend some $61 billion on our critters. Our homes are filled with millions of dogs, cats, gerbils, hamsters, goldfish, and icky lizard-like things. We love them all dearly, but they have no voice in Washington. This will be the most important addition to the Cabinet.

Secretary of Pizza: We spend almost as much on pizza as we do on our pets—$37 billion a year, and that’s a lot of pepperoni. The secretary of pizza will address a number of important issues, such as: Should there be a national pizza? Deep dish or thin crust? Are anchovies poisonous?

Secretary of Television: Considering the hundreds of hours that Americans fritter away staring at the one-eyed television monster, we definitely need even more federal meddling than we already have. At least 75 percent of the programming on TV is already stupid, inane, disgusting, vile, or a combination of all four. With the help of a few seasoned federal bureaucrats, there’s no reason we can’t reach 100 percent.

Secretary of Silly Walks: This new Cabinet department is a tribute to our friends across the Atlantic, “Monty Python’s Flying Circus,” and the troupe’s wonderful sketch on “The Ministry of Silly Walks.” John Cleese, the brilliant comedian who does the sketch, will be the honorary secretary of this new department. If you’ve haven’t seen the Monty Python routine, then run to your computer and Google it. Watching John Cleese is a much better way to waste your time than reading this silly article.

Secretary of Raindrops on Roses and Whiskers on Kittens: This important new Cabinet position will meet a clear need in American society. The department will prevent people from being grumpy, angry, nasty, or any of those other disgusting emotions that people keep exhibiting. If you’re angry or grumpy, you just need to hear Julie Andrews sing a few lines from “My Favorite Things.” Who can be unhappy when they hear Julie sing about “cream-colored ponies and crisp apple strudels, doorbells and sleigh bells, and schnitzel with noodles.” Anger is no match for “bright copper kettles and warm woolen mittens.” The cost of the department will be relatively low. The only expenditure will be for the placement of kiosks around the country where anyone can pop in and play some happy words from good old Julie.

Secretary of Payoffs, Graft, and Under the Table Cash Flow: This department sounds bad at first but it actually will be very effective and save money for the government. We know there are thousands of sleaze balls throughout government who are stealing from us in one way or another. We just localize them all in the same department and they steal from each other.

Secretary of Eating, Wine Tasting, and Sleeping: People already are lining up for positions in this new Cabinet department. Don’t bother applying to head the department. Just call me Mr. Secretary.