Cruising beyond the port 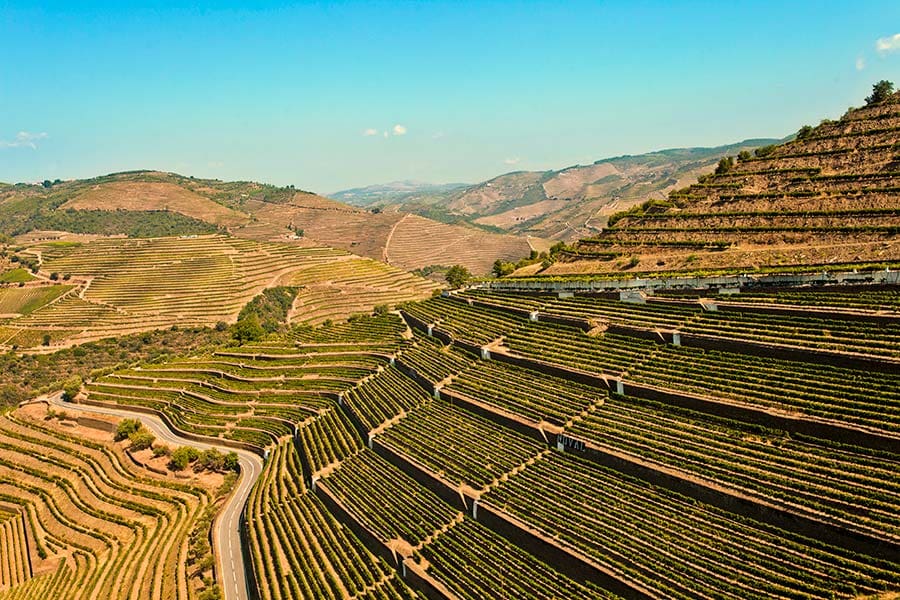 Cruising beyond the port

Portugal’s Douro River Valley is getting an international reputation for its distinctive red wines created in some unlikely rocky vineyards.

Many people think the only wine that Portugal has to offer is port, the fortified sweet wine that is a delicious accompaniment to desserts. Up until a few years ago, finding a dry red, unfortified Portuguese wine in the United States was tough. Now they seem to be everywhere. For the first time, they’ve even cracked the prestigious Top 100 Wines list from Wine Spectator magazine.

Located west of Spain on the Atlantic Ocean, Portugal’s Douro Valley—the country’s major wine-growing region—seems an unlikely spot for vineyards, with its rocky crystalline “schist” (called slate in other European regions) and harsh summer sun. However, the Portuguese knew best what would grow on those vertical sloping hillsides—the Touriga Nacional grape. While other countries rushed to plant French vines, Portugal stuck to the indigenous grape variety and now is giving Bordeaux-style blends a little competition with complex wines of its own.

Red wines made from the Touriga Nacional grape can seem harsh with the first sip. All the Portuguese wines I tasted needed to breathe for at least 30 minutes or be decanted. Only then did the softer flavors emerge.

“When trying Douro wines for the first time, the taste can be very different,” explains winemaker Miguel Roquette, whose family has owned Quinta do Crasto for more than a century. “They also have lots of minerality because the vineyards are planted in rocky schist.”

Roquette conducted a master class at last year’s Atlanta Food and Wine Festival, where his Crasto Superior wines were tasted alongside varietals from other countries, including France. He described the Portuguese varietals as new wines made with old traditions.

“Everything is handpicked and hand-crushed,” the fourth-generation winemaker says.

After sampling several Portuguese wines from the Douro region and one from Dão, south of the Douro River, I was surprised at the differences among them. I also learned that many Portuguese wines have the word “Quinta” as part of the name. Though the word means large house (think “Chateau” on French labels), it is an official designation to show the grapes came from that specific estate. “Superior” in the title means the grapes are from the Upper Douro, the flattest, driest area that produces some of the best grapes.

Over the past few weeks, I’ve heard many misconceptions about wines from Portugal. The most common was that Portugal doesn’t produce good red wine except port. I wouldn’t describe the red unfortified wines as poolside sipping wines. After all, they tend to be like a sledgehammer in your mouth if they haven’t had time to breathe or haven’t been decanted.

As I opened the bottles, I was reminded of a quote that winemaker Roquette shared from his grandfather back in Portugal: “Anyone who says they know everything about wine is a fool, because wine is constantly evolving.”

That was certainly the case when it came to discovering these Portuguese wines:

Casa Ermelinda Freitas Touriga Nacional Reserva 2013: This full-body, concentrated wine screamed “licorice” on the first taste. After it had time to breathe, the bouquet became more floral and the taste evolved into jammy fruit. It was excellent served with flank steak pinwheels stuffed with spinach and provolone. (Suggested retail: $14.99)

Feuerheerd’s Douro DOC Red 2013:Tearing through the bright white wrapper that comes around this bottle was like opening a surprise gift. I didn’t know what to expect. The aroma was very pleasant—more fruity than earthy—but the taste was definitely minerally, like slate. However, there was a party in my mouth when I paired it with chocolate cookies. Those sweet treats brought out the dark fruit flavors. (Suggested retail: $13.99)

Barão de Vilar Red DOC Dão 2011: The Dão region is south of the famous Douro River, but it also claims the Touriga Nacional grape as its own. The medium-bodied wine is blended with two other grape varieties, which gives it a smoother taste, and a little spice. I paired it with a meatball sub. (Suggested retail: $11.99)

Quinta das Carvalhas Reserva DOC 2014 : I had this wine on my birthday with a Brazilian steak. I was so happy to find it locally because it is an excellent alternative for more expensive Bordeaux blends. Just as with the others, this wine must be decanted and needs to be paired with a strong dish or game. (Suggested retail: $19.99)

Used mainly in port wines, the Touriga Nacional grape is native to the Douro and Dão regions of Portugal, where winemakers are creating some interesting red wines. The grape, often used as a building block in blends, is to Portugal what the Cabernet grape is to France. The rich color creates dark wines with complex aromas.

It takes strong food flavors to stand up to Portuguese dry red wines, which have complex tannins and can be quite concentrated. Red meat and game are good pairing choices, as is French foie gras.