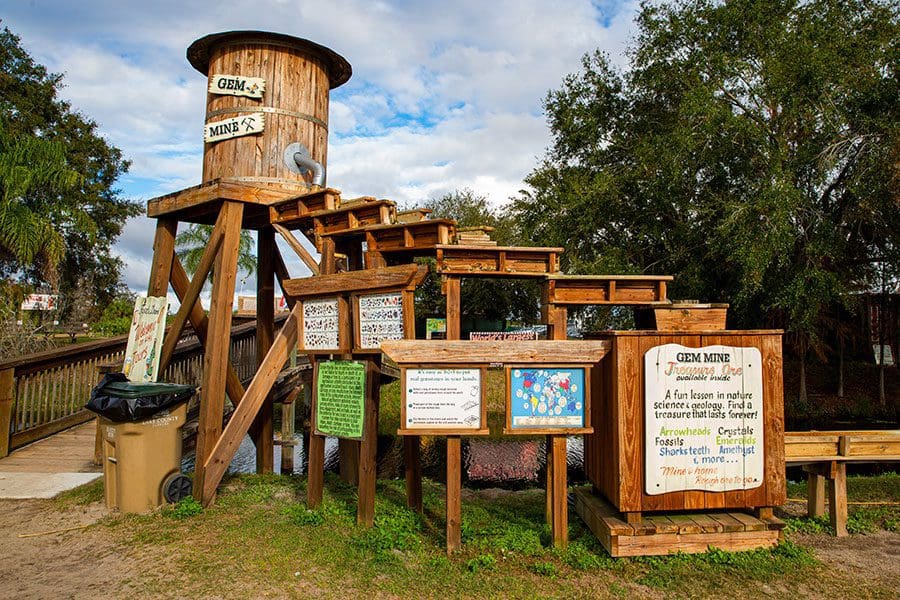 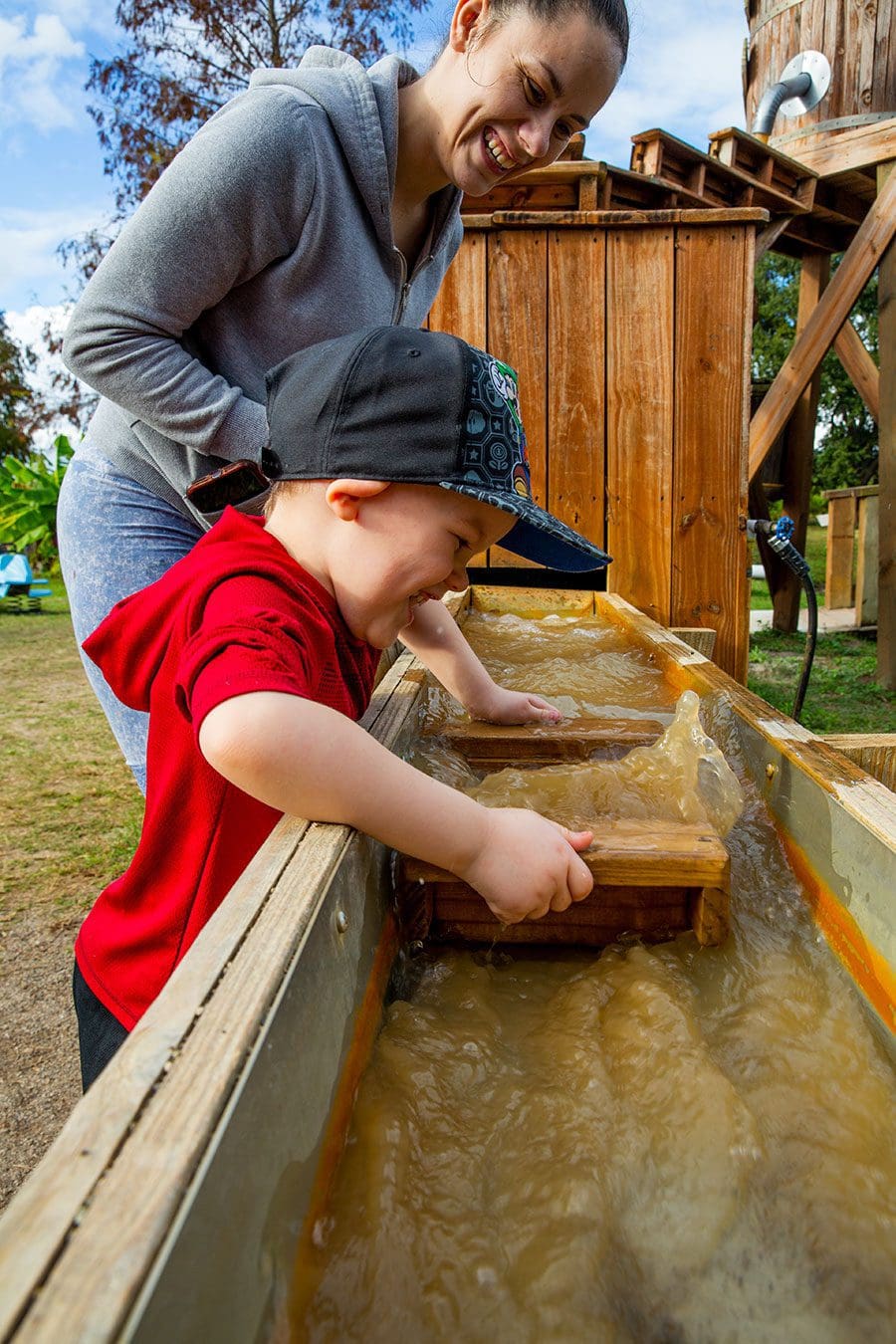 Most people can’t give their kids a million bucks, but how about something that will make them feel like they hit the jackpot?

The unmistakable delight in 4-year-old Bentley Pinizzotto’s laughter was visibly backed up by smiles and leaps of joy while recently sifting through dirt at Clermont’s Showcase of Citrus.

But it wasn’t just any old dirt, but dirt from a “Mother Lode” bag, filled with fossils, shark teeth, arrowheads, and gems in all shapes, sizes and colors just waiting to be uncovered, purchased for him at the venue’s Gem Mine Experience.

“When the kids find the gems, they are so excited like they’ve just won the lottery and it’s just so cute to see,” says Showcase employee Aly Sferrazza, explaining how the gem mining process works. “What we do is take whatever bag a customer purchases, and pour some of its contents into the sifter (or sluice box) that’s been placed in the trough and into the water. Then, as the water floats through, magically, the dirt will start dissipating and the gems and other goodies will appear.”

Bentley’s mother Nicole Hines says she was pleased to see her son so genuinely enjoying the experience.

“He likes rocks, digging in sand and things like that, but I didn’t think he’d have the attention span to actually sift and look for the gems, but he did and it was fun,” says Nicole.

Bentley, explaining that his favorite gem was “the rainbow one,” adds: “I like rocks and sand and I need toys.”

The two got together in 2012 and today, their blended family – which includes six kids between them – run the family ranch and one of the south Lake area’s few remaining active citrus groves.

In total, it all sits on 2,500 acres, also home to the Showcase of Citrus, a massive roadside attraction that in 2021 was officially trademarked “Florida’s Fresh Air Attraction.”

“We all live and work on site. Our girls work in the fruitstand and the boys work in the groves. It is truly family owned and operated, and those who are part of our great staff, and not actually part of the family, are like family,” Tara says. “We’re blessed.”

As for visitors, they can pick from an array of activities to enjoy with their own families, including u-pick citrus, monster truck tours of the entire property, two playgrounds, feeding farm animals, and most recently, the Gem Mining Experience, added just five years ago.

Tara says John was itching to add something new and fun, yet unique.

“It was literally an a-ha moment,” Tara says of the gem mining. “We started with the water wheel and we kept adding to it with the trough and everything. Then, when John came up with the mining idea, we went with it and it’s been great.”

Tara says the activity has sparked interest from tourists and local families, but also teachers looking for educational opportunities for their students.

“We do a lot of school field trips, so this is cool to have,” Tara says. “It incorporates some agriculture and geology aspects, and it does bring more students here because now they get to learn about mining, rocks and gems.” 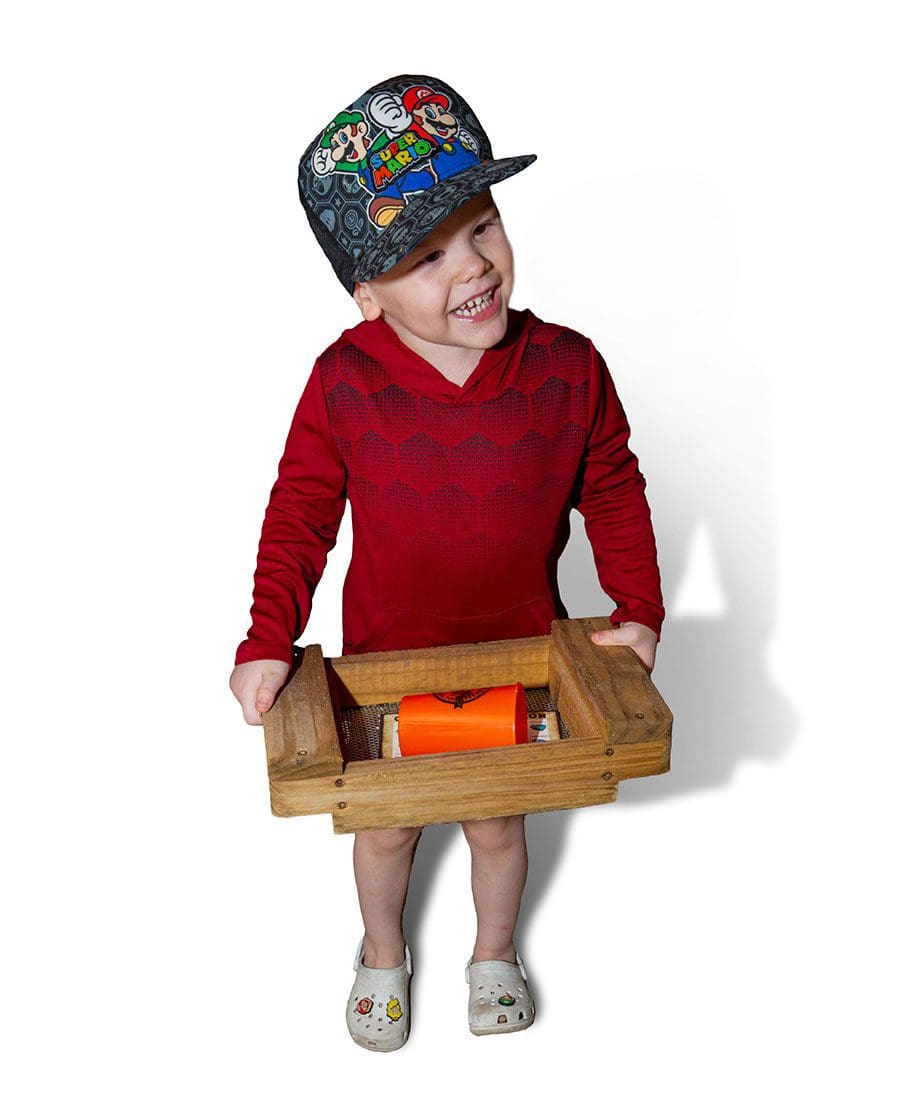 “I really liked rocks when I was a kid. I would’ve loved it,” she adds.

Additionally, while at the Showcase of Citrus, people can purchase fresh-squeezed orange juice or bags of fresh oranges from the fruit stand. They can also enjoy a bit of shopping in the family’s old time country store, which resembles an open-air market, and that offers items like jewelry, beauty scrubs, small toys and trinkets and other souvenirs, plus orange inspired selections like candles, soaps, perfumes, honey, marmalade, salsa, wine, and more.

And if that’s not enough, there is a good variety of food trucks parked on site with offerings to satisfy anyone’s hunger.

Yia Yia’s Bakery offers authentic Greek pastries and breads, there’s a bar that serves a variety of beers, wines and mimosas (including orange-flavored), and a slushy stand featuring the Showcase’s signature orange creamsicle; a combination of frozen orange juice and vanilla ice cream that is to die for. 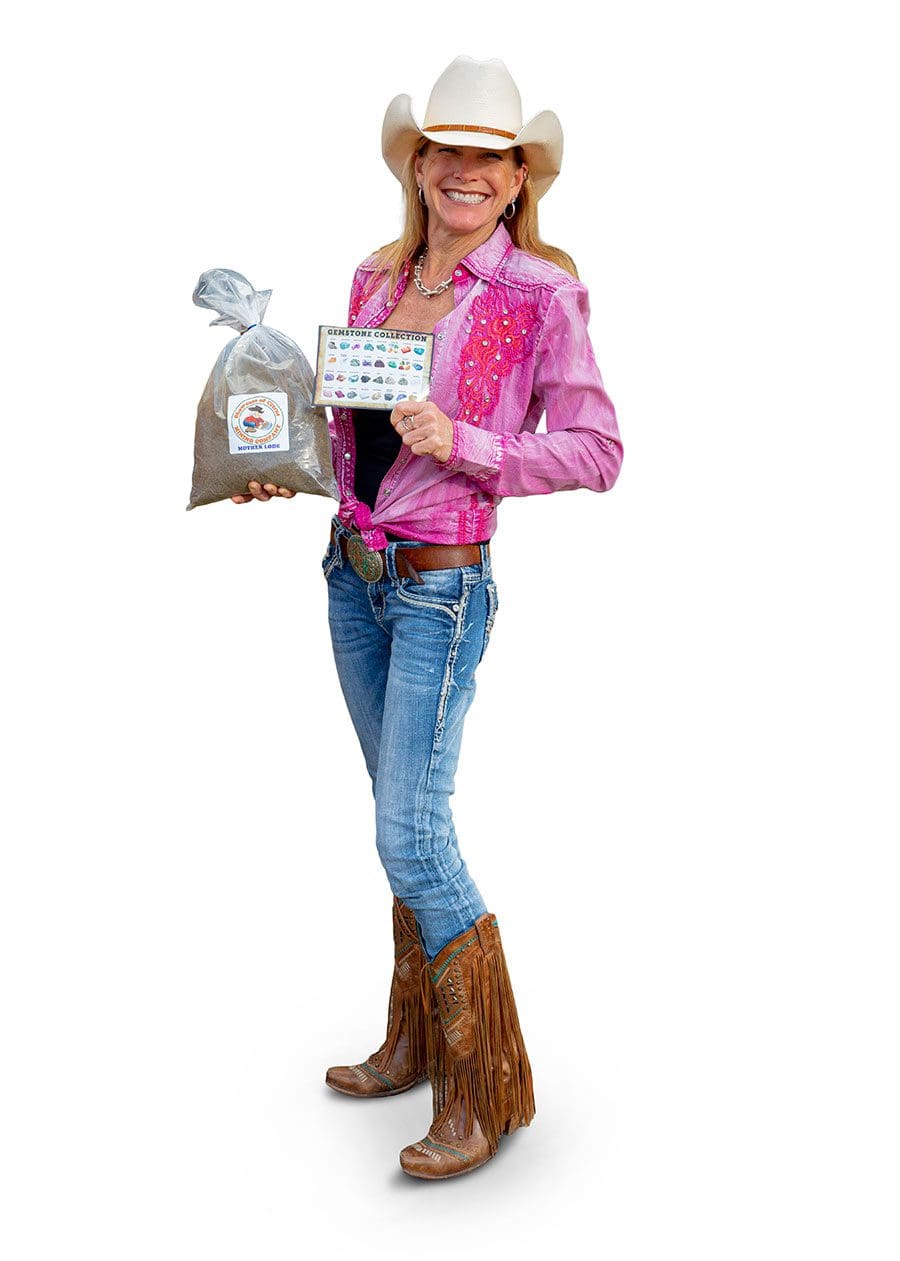 Either way, there is something for everyone.

“Kids love the gem mining and everything else we have because they just get to be kids and have fun,” Tara says. “We say we are the vacation from the vacation. People come to Florida from all over the country and the world, and they are so regimented with their vacation plans, but when they find us, it’s like they can relax and just have a fun time without having to stick to any schedule or stand in any lines.”

The Showcase of Citrus’ website reads: “You may drop by thinking you will just pick up a bag of incredibly fresh fruit, but realize hours later that you have spent the entire day with us, walking through the grove, taking in the fragrance of orange blossoms, and strolling along the waterfront grounds. That’s the way we like it!”