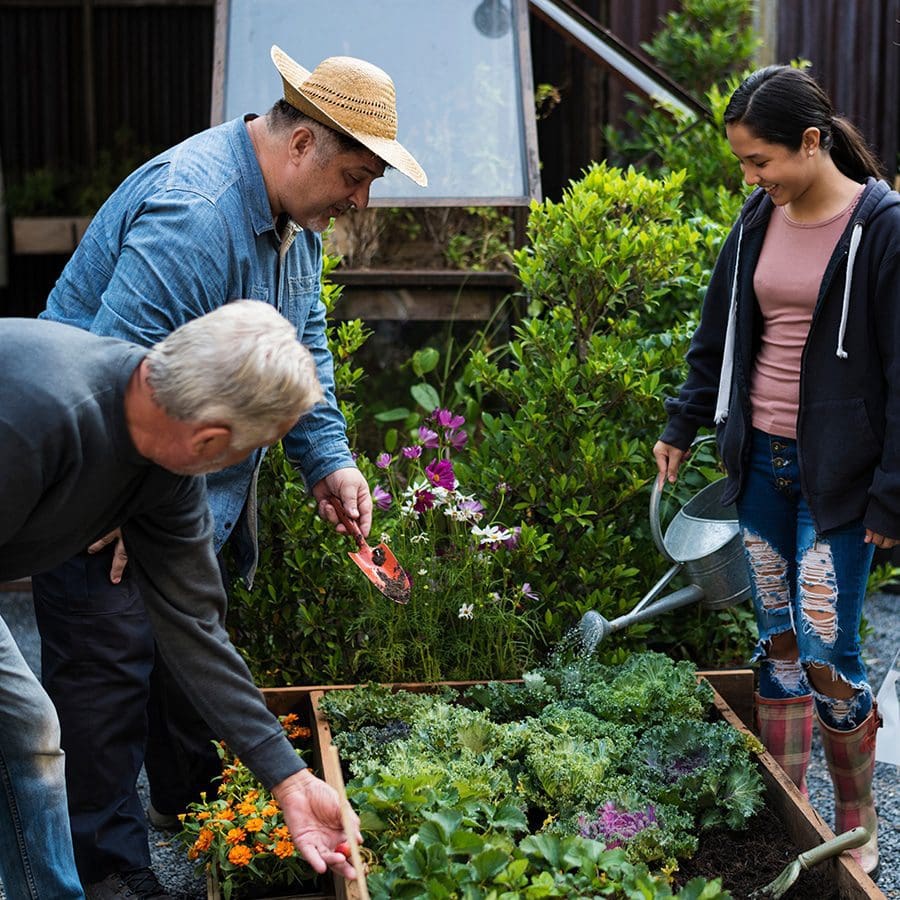 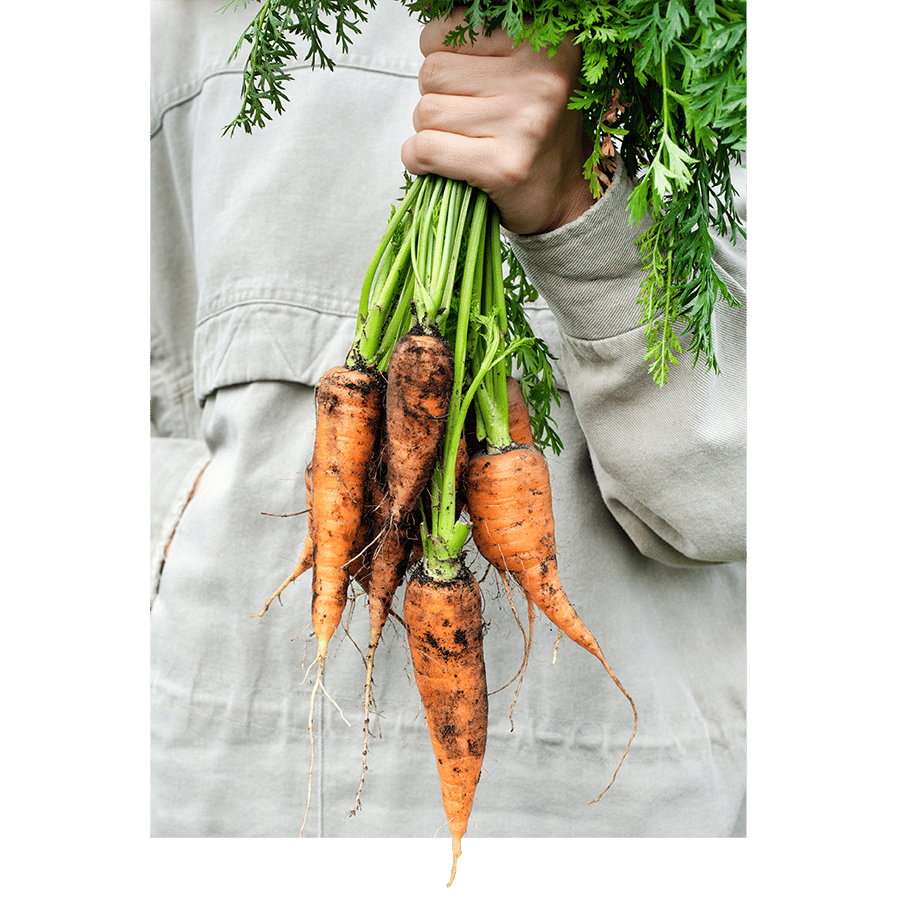 Cheryl O’Rourke, service director of the Boys and Girls Club of South Lake in Clermont, encourages active participation in projects to not only keep students interested in the subject at hand, but to demonstrate how hard work can really pay off.

In fact, before moving to Florida five years ago, she was the director of a daycare in Pennsylvania, which is where she first dabbled in gardening to teach her preschoolers about food, sustainability, and community.

Cheryl says the kids became quite fond of gardening, and together they grew corn, peppers, cucumbers, squash, tomatoes and more, and all in 65-gallon totes she lined up on the outside patio and rigged with plastic water bottles to help with aeration and drainage. They even tried foods they may have never tried otherwise.

“It makes a big difference when they are planting the seeds, watching their garden grow, picking their vegetables, and even though they are saying ‘Ooh, I don’t like that, I don’t want that,’ they’re more inclined to at least try it out of sheer excitement,” Cheryl adds.

Cheryl said the children reaped much more than fruits and vegetables from the project. They harvested a sense of pride, felt they were making a difference, and accomplished something they didn’t know they could.

That’s why Cheryl is excited to see if gardening grows on older children when she introduces Boys and Girls Club members to an aeroponic garden tower she acquired and to the future community garden the City of Clermont is building in the club’s backyard.

“It’s up to us to enrich our kids with every teachable moment that comes through, whether it’s growing things in a garden or taking the trash out in a sustainable way where our kids are helping be part of the solution and making a difference,” Cheryl says.

“It comes back to career development, healthy lifestyles, education, community leadership, and being good citizens, all main focuses of the Boys and Girls Club,” Cheryl says, adding that it’s important to also keep gardening in mind because, at some point, it could become a necessity.

“This might be life or death one day; people growing food because they don’t have food. This is an amazing thing we get to offer our kids and it’s an experience they may not get anywhere else,” she adds. 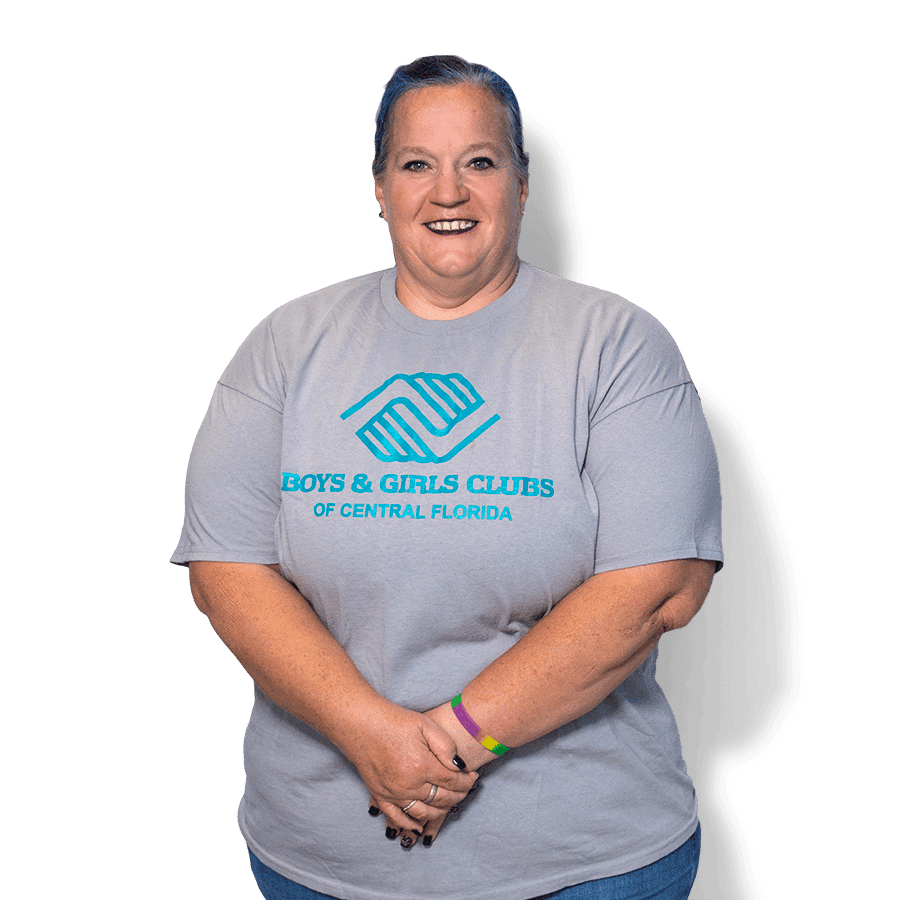 This will be the city’s second community garden project. The first was on South Lake Hospital’s campus, though it was not as big or elaborate as what’s to come.

The grant Clermont received is one of two awards that came out of a Niagara Bottling and the National Recreation and Park Association (NRPA) contest called “Perk your Park” in September 2021. The contest focused on park and community space revitalization across the country. With the grant funds, the city now has the means for something even more special.

Suzanne says many city residents have expressed interest in getting involved with the community garden and are looking forward to renting a gardening bed.

“This project is all about us providing the space that they—the community—can utilize best and that is affordable for them, especially if they don’t have green space, or if their apartment doesn’t have the ability to build or buy a bed,” Suzanne says.

The .3-acre garden will initially have 29 different size beds, and three hydroponic towers, along with a butterfly garden, walking trail, pergolas, and quiet space for members of the community.

The sign at the entrance is even meaningful because it was drawn by local student Jillian Cecilio, who entered and won a contest the city offered to area schools.

Residents interested in gardening will soon be able to fill out an application to rent a bed for a small annual fee.

Suzanne also hopes to get businesses, local organizations like the Boys and Girl Scouts, churches, and school groups like 4-H and FFA involved as volunteers to help with upkeep.

Community gardens provide multiple benefits to the community and its gardeners by:

She also envisions the community coming together for classes, demonstrations, and more.

“Maybe being outside, being active and being somewhat self sufficient is on people’s minds, but I have been getting great feedback. Those types of groups have been contacting me for quite some time,” Suzanne says. “That’s a big part of this; providing the education and support for people to be able to grow their own food.”

Tavares’ Parks Operation Manager Traci Anderson is happy to hear of Clermont’s endeavor and wishes them well. She’s seen what such a garden can do for a community and its residents.

In the early 2000s, Tavares developed Aesop’s Park as a “community backyard” facility near its downtown district, which offers exercise opportunities, a pond, special play areas for dogs, and other activities that would normally take place in a residential backyard environment.

Another component of Aesop’s Park is a 6,000-square-foot community vegetable garden consisting of individual plots, irrigation, and compost materials, all offered to residents free of charge. (Non-residents can lease a plot for a fee of $20 per year). There are also two raised beds to accommodate wheelchairs and people who have difficulty kneeling or bending.

According to the City of Tavares website, “Community vegetable gardens, which were common in cities during the Great Depression, are once again popular across the country. They allow people who live in apartments or homes with little outdoor space to grow their own vegetables at minimal cost. This is a wonderful family or group activity, and an opportunity to teach kids about the joys of gardening and growing your own vegetables.” 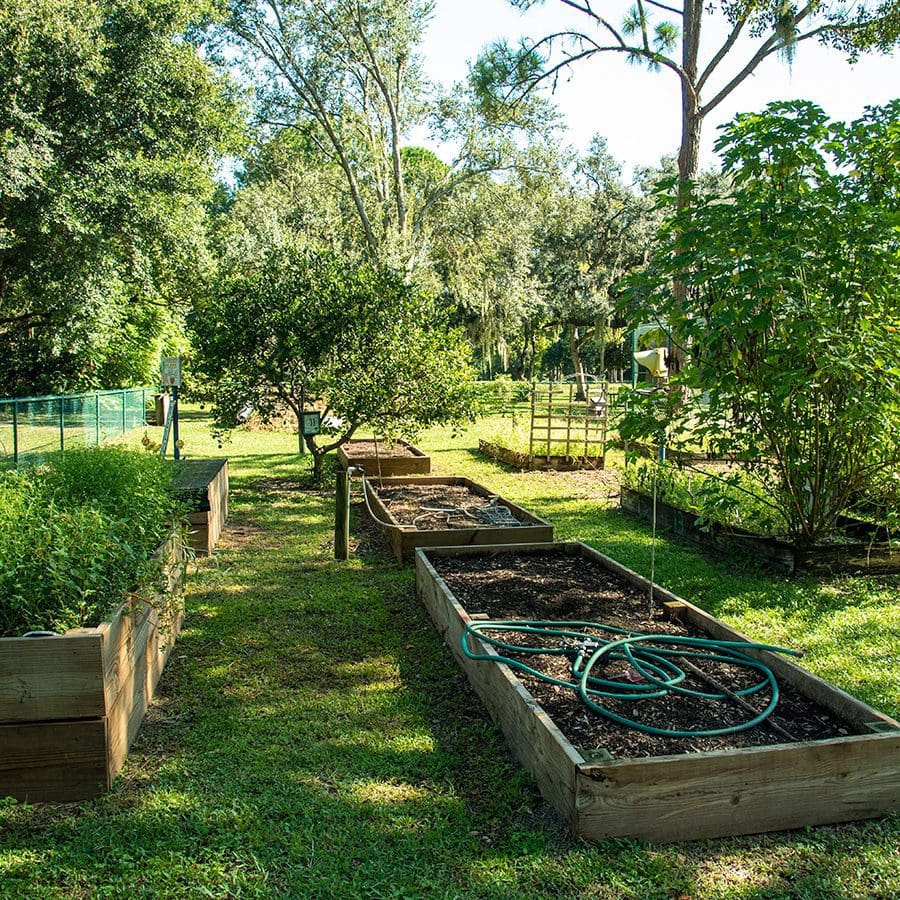 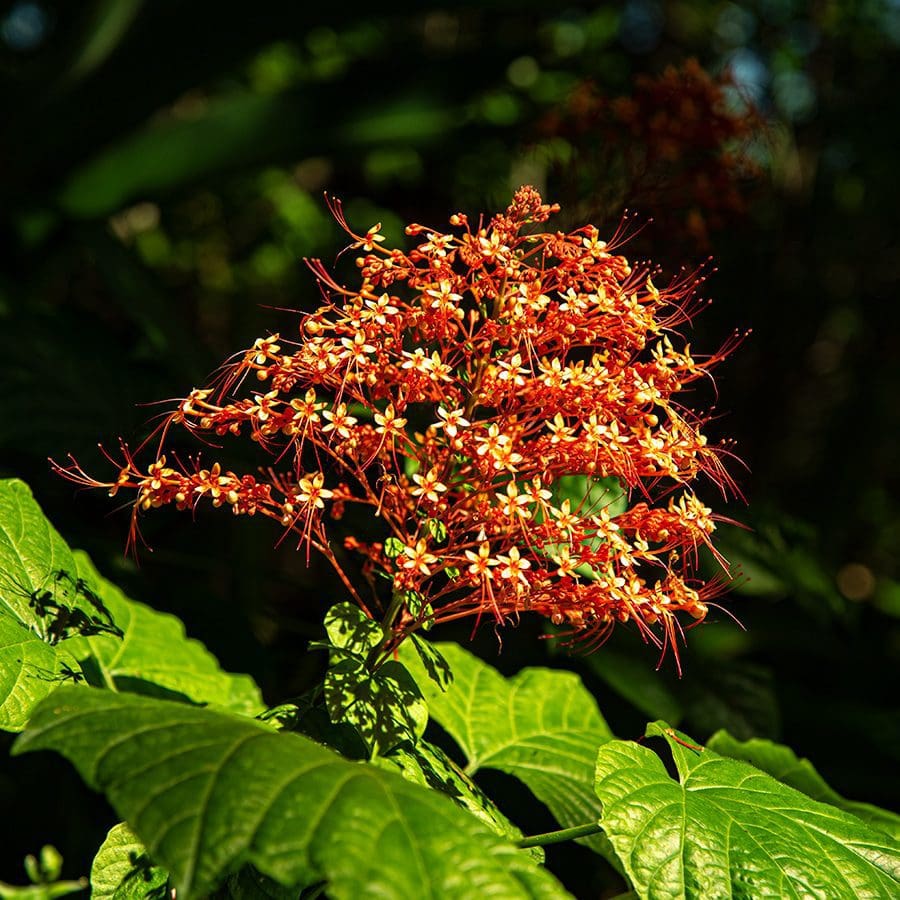 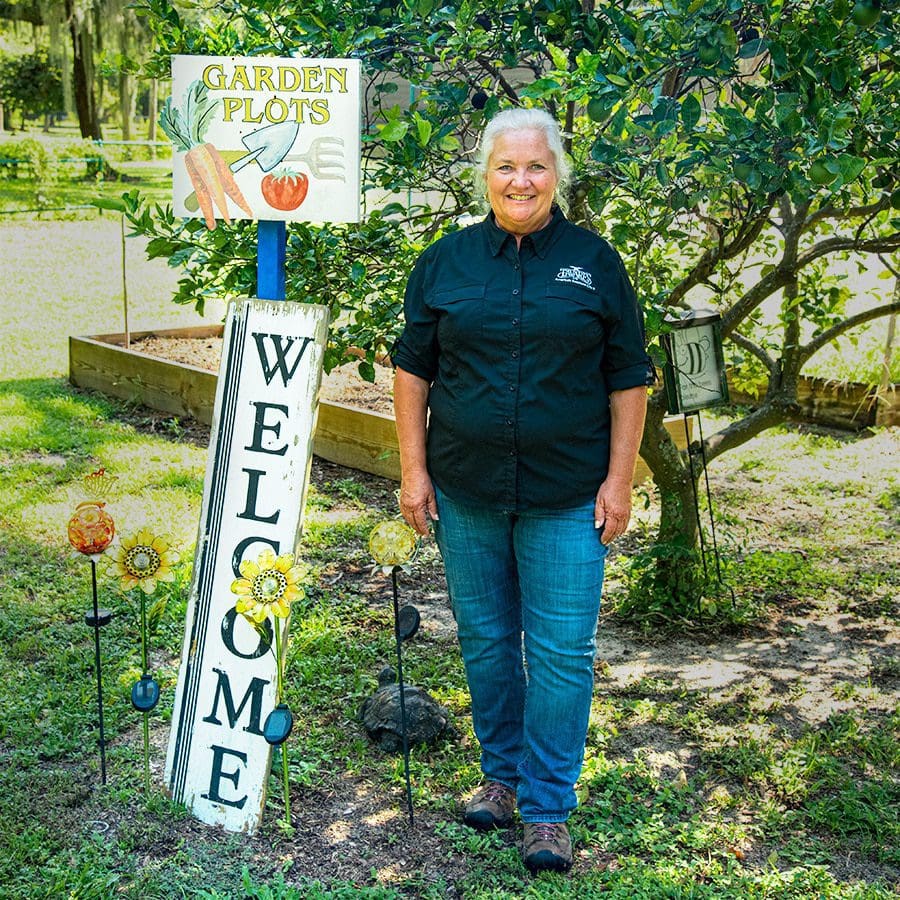 Traci says the city is currently rebuilding some of the more weathered beds because of the value the garden brings to the community. Beyond that, residents are fully responsible for maintaining, watering, weeding and harvesting their own plantings.

“Our garden is small, but the light is perfect with the live oaks we have there. It’s beautiful, so peaceful, and cool, believe it or not,” Traci says. “People take care of it, they talk, help one another, and they’ve even decorated the grounds with signs and tin can sculptures. It’s just nice to see community happening there.”

Traci may be biased though, considering she’s been gardening since childhood. And, as an adult before coming on board with the city, she and her husband ran a nursery.

“I can remember digging up plants at my grandmother’s house. She’d have colias, and I would take old plastic ice cream containers and root the cuttings as a kid, and I love propagating,” Traci says, adding that she helps residents when possible if they have questions about planting, how to add nutrients to soil or gardening in general.

In Clermont, Suzanne is getting there, too. In researching nearby community gardens for design ideas, she was inspired to purchase a hydroponic garden tower and started growing vegetables at home with the help of her three boys.

“I’ve always had an interest in gardening so I’ve done a little bit with it in the past, but mainly, I would plant things just to plant them, and they would die. I didn’t know. It was really a learning curve for me, but I’m really getting better,” Suzanne says. “It was an investment, time, and money, but my cherry tomatoes are probably 11-feet tall right now, and it’s great. It’s been a little easier than I expected, and I think people are really going to enjoy the garden just as much as we’re going to enjoy seeing it flourish.”

For more information about the Clermont Community Garden at 3700 S. Highway 27, call Suzanne at 352.708.5998. Commemorative bricks to be placed at the garden are also available for purchase.

For more information and ideas for your personal garden:

Discovery Garden hours are weekdays and the third Saturday of the month, 9am–4pm.