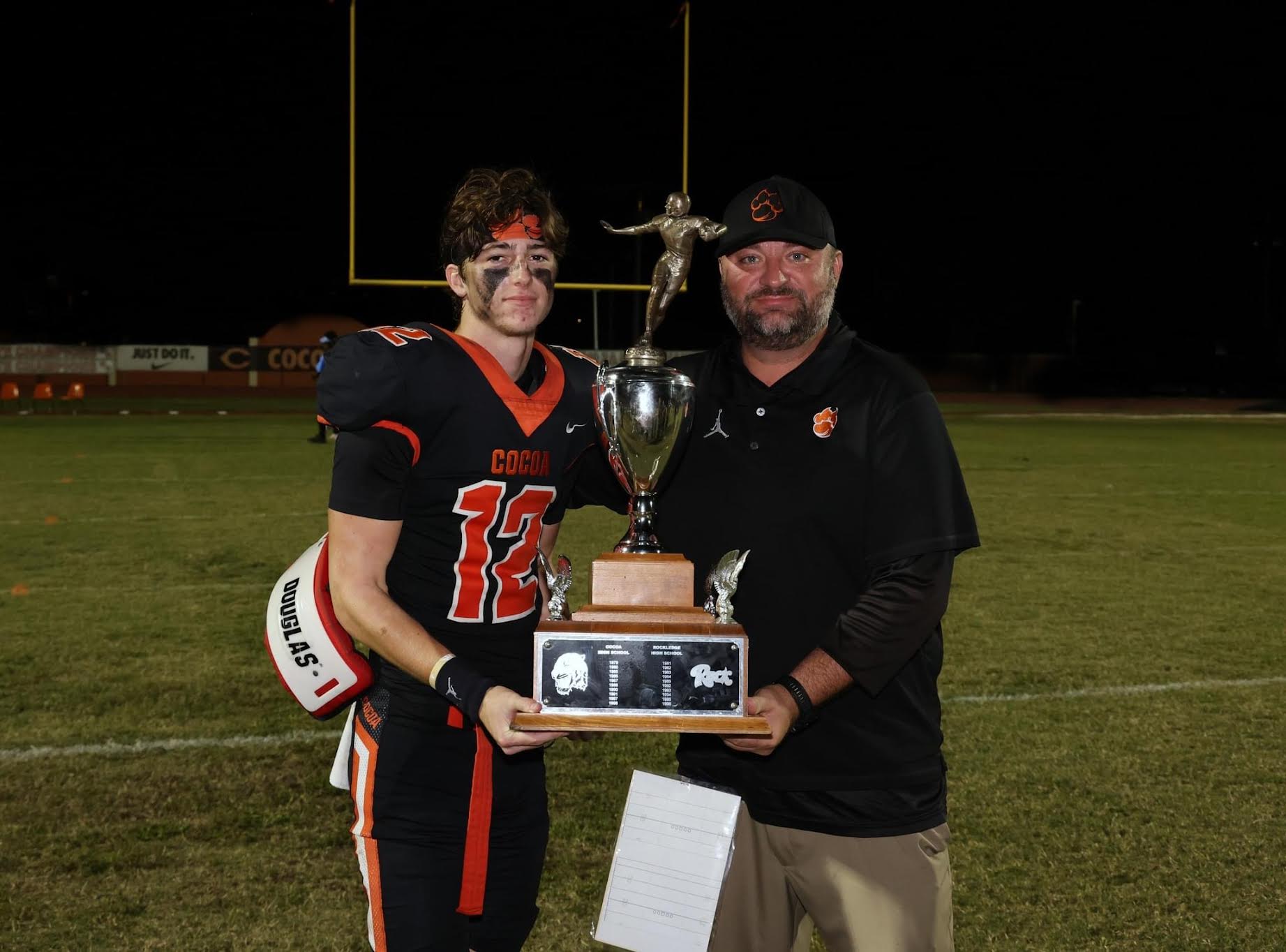 Could Lake Minneola or South Sumter make the State Semi-Finals?

First off let’s just congratulate both South Sumter and Lake Minneola for making it this far in the season! These teams game everything they had to the bitter end. Both teams made us proud. Let’s take a look at the highlights and what happened this evening! 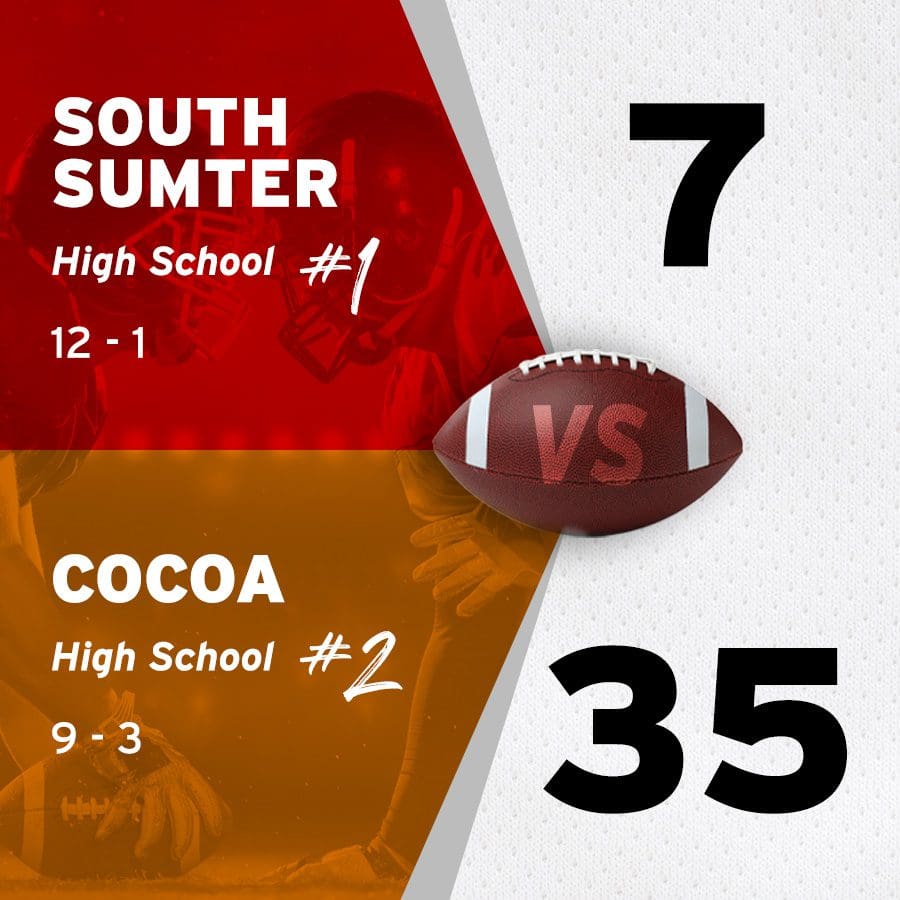 This was a battle between two power house programs who gave it everything they had!

Things got started off on a blazing note for Cocoa. This is the best offense South Sumter has seen all season long and it showed. Senior QB Blake Boda absolutely dominated on the first possession driving right down the field where Cocoa scored the first touchdown of the game and made it 7-0. 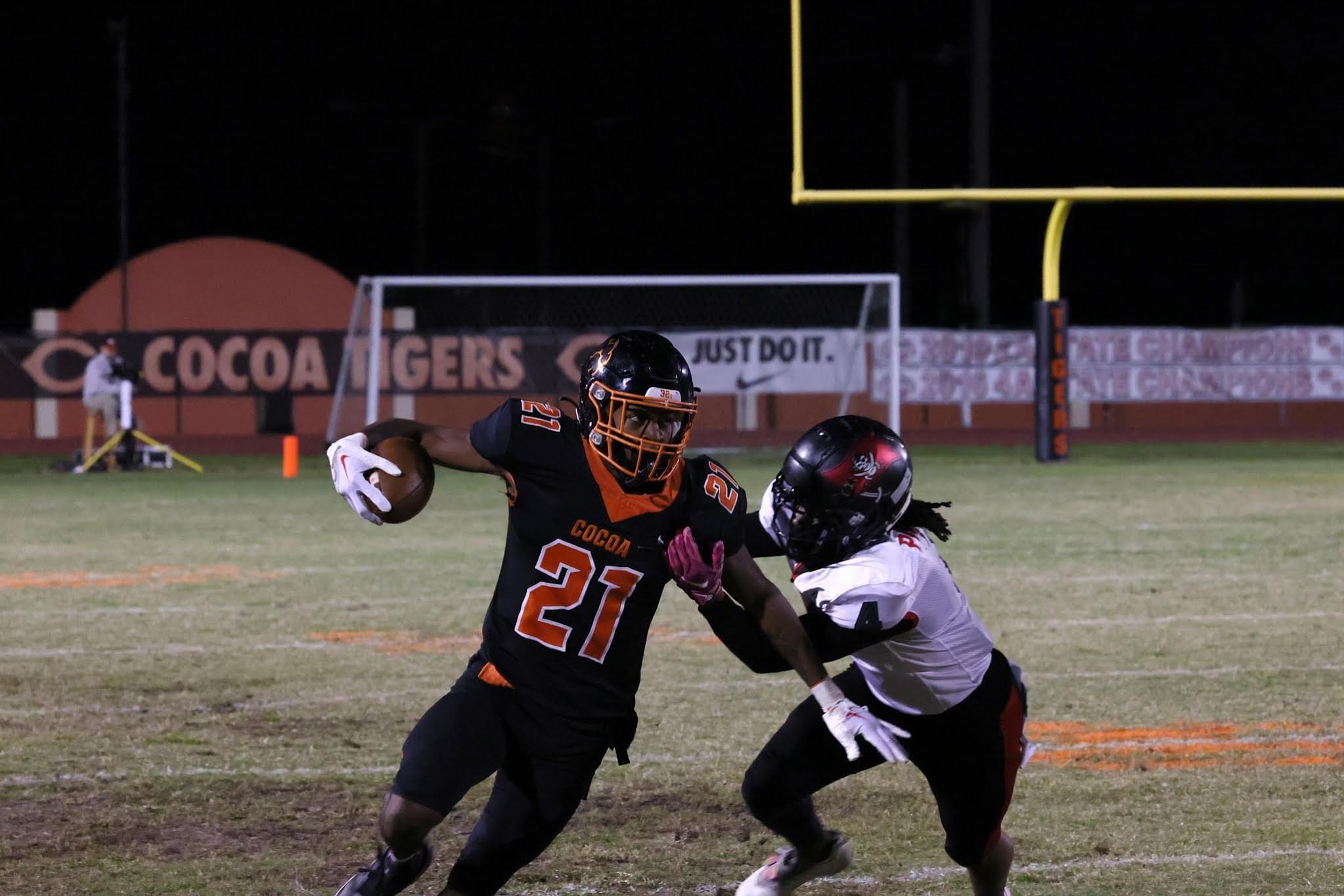 From there the game stabilized a bit as The Tigers and South Sumter exchanged punts. At this point South Sumter was looking pretty stout and the defense began to calm its nerves a bit after that opening drive pasting. However as South Sumter was driving the ball inside Tiger territory for the first time they unfortunately fumbled the ball and Cocoa recovered.

As the second quarter began it was all Cocoa. The offense had a big run by Anthony Bridgewater and that eventually lead to a touchdown by QB Blake Boda which made it 14-0 Cocoa. South Sumter just couldn’t get the offense flowing and ended up with a three and out kicking the ball to Cocoa once again midway  through the 2nd quarter where The Tigers once again scored yet another touchdown on a beautiful pass from Blake Boda. 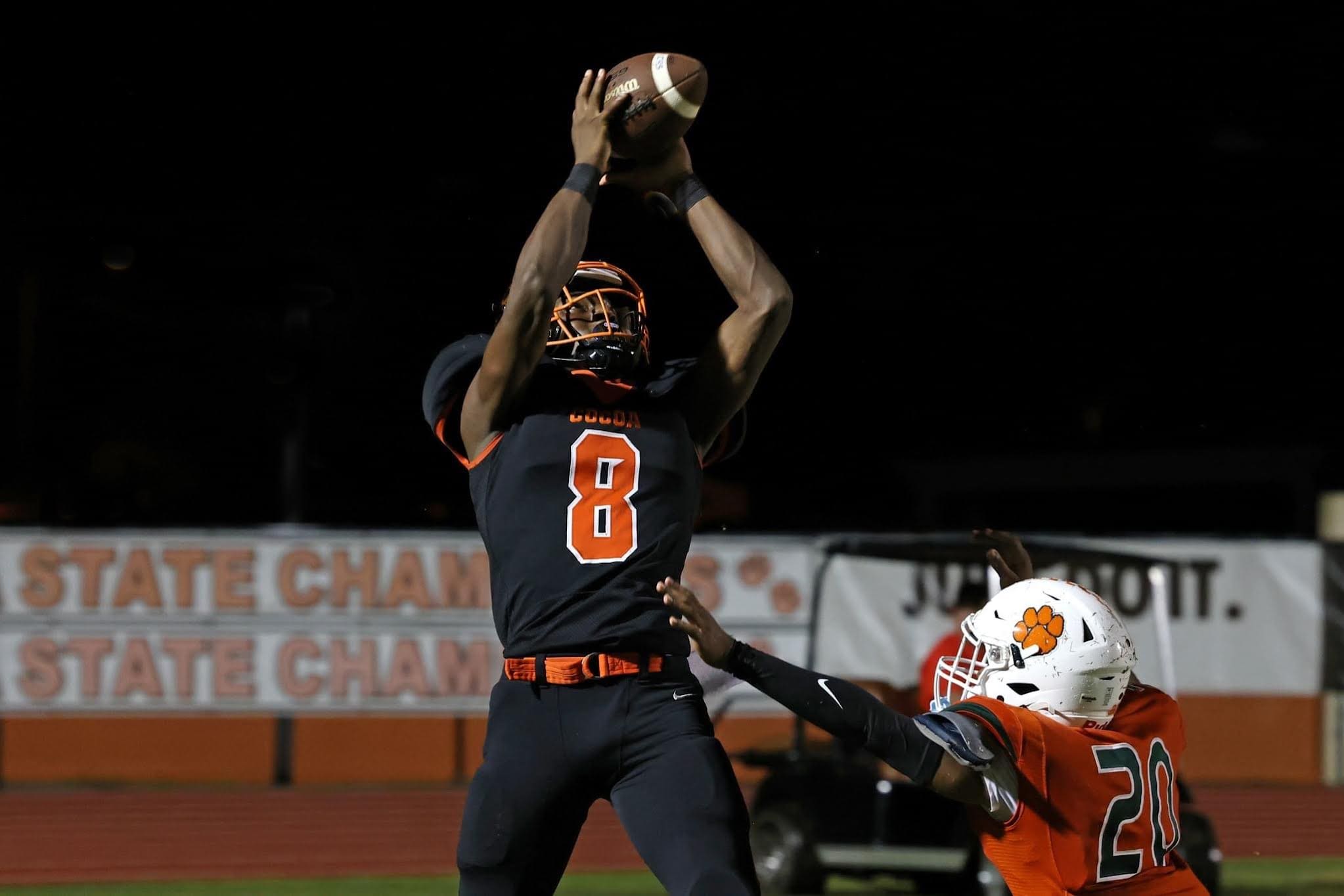 Halftime was approaching and South Sumter knew they had to get some points on the board. Eian Finkley handed the ball off to Jamare Dorsey for a nice run however South Sumter ran out of time in the quarter and couldn’t convert the drive into points. Cocoa lead 21-0 at the half.

The third quarter was highly competitive with each team turning the ball over on downs. Cocoas defense was superb all evening and even as South Sumter looked to be gaining some momentum they rose to the occasion each time. Cocoa never slowed down on offense and by the 4th quarter we had a running clock and there was nothing South Sumter could do about it.

Cocoa took care of business and won the game by a final score of moves onto the State Semis where they will play against Bishop Verot which should be an absolutely fantastic matchup and we wish Cocoa the best of luck as they try and win a state championship. 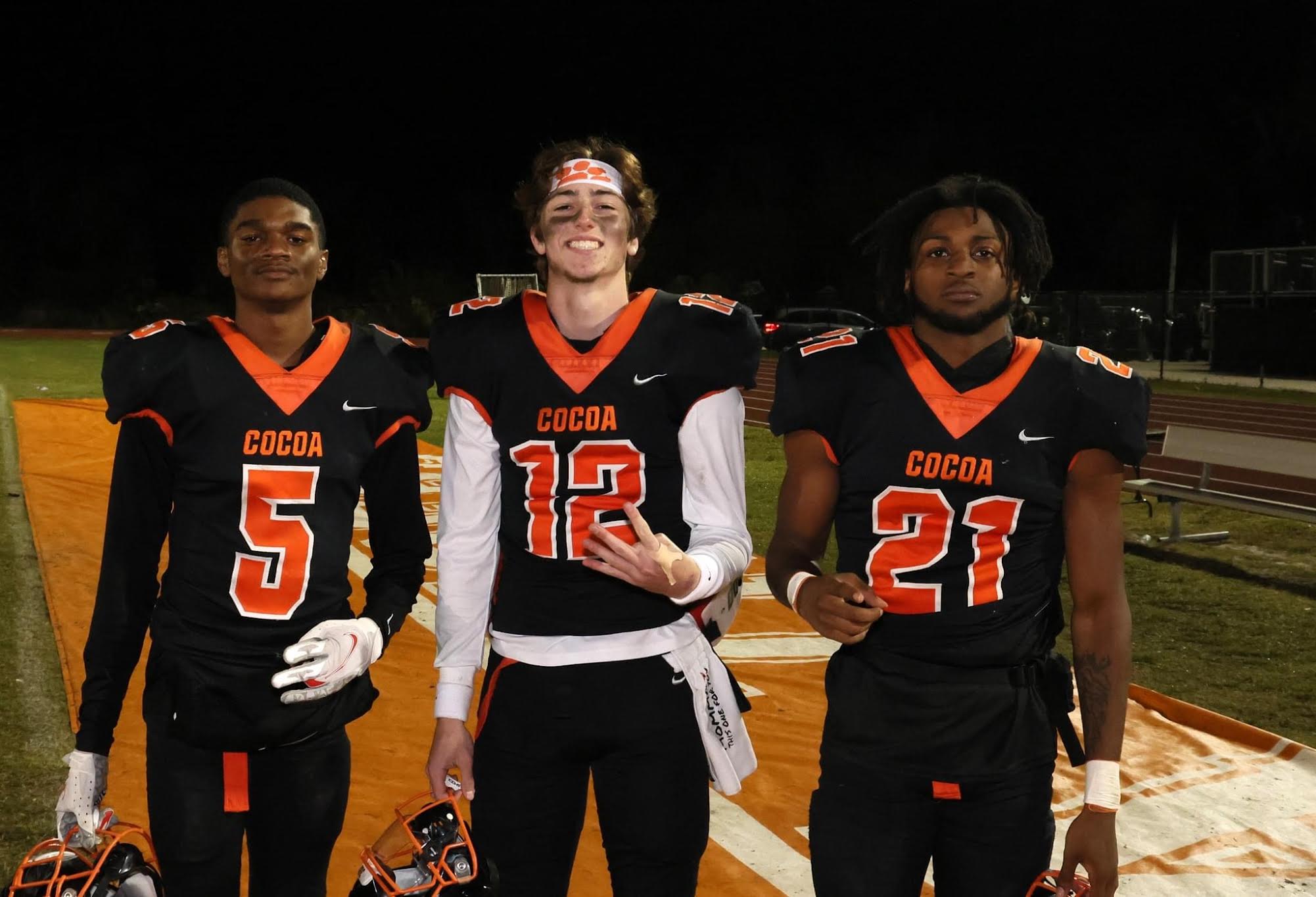 As for South Sumter they finish the season 12-1 on the year. It’s a year to be proud about. This team was 0-10 just 5 years ago and to be where they are at now is not a surprised considering how Coach Ty Lawrence goes about things. Ever since Lawrence took over this program South Sumter has looked impressive. We are so proud of this team and let’s give some shoutouts to some stand out players.

As Senior QB #5 Eian Finkley stepped off the field for the final time you could see how much football means to him. His teammates likewise all cared so much about the season and although it didn’t end up in a championship The Raiders can hang their heads high. 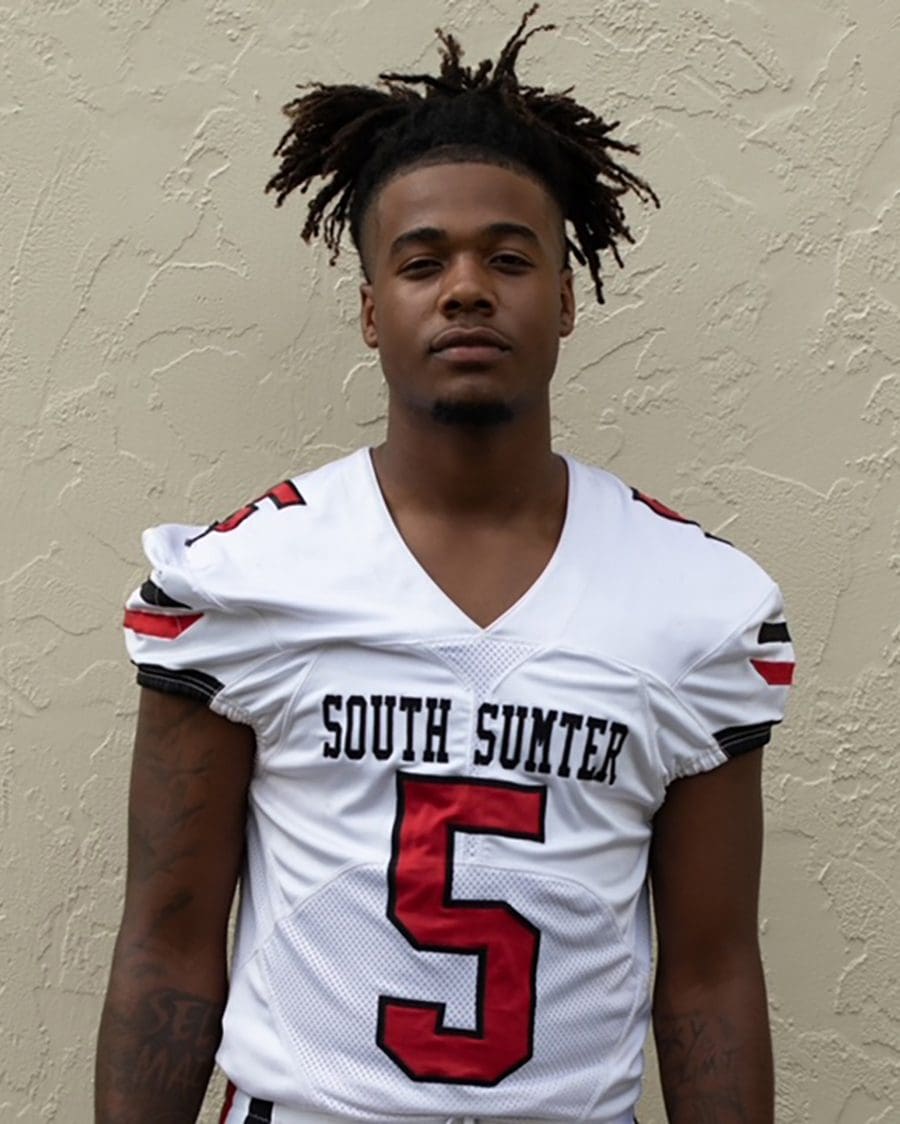 Finkley finished his Raider career with over 2,000 yards on the season while adding 24 touchdowns. He will leave as one of South Sumters best QBs in program history. Meanwhile Junior RB #3 Jamare Dorsey ends the season with over 20 touchdowns and 700 yards of total offense. He will be fun to watch next season! Senior RB #24 Kaden Payne also took his final carry tonight we will look forward to seeing Kaden on the basketball court this month.

As for more of the seniors WR #8 Elijah Adams played his last game and was one of the leading wide receivers along with Sophomore #28 Stanley Young. Both combined for over 700 yards through the air this season. The offense never looked better for South Sumter. Although they fell short they have so much to build upon for next year with a massive junior class returning next year. 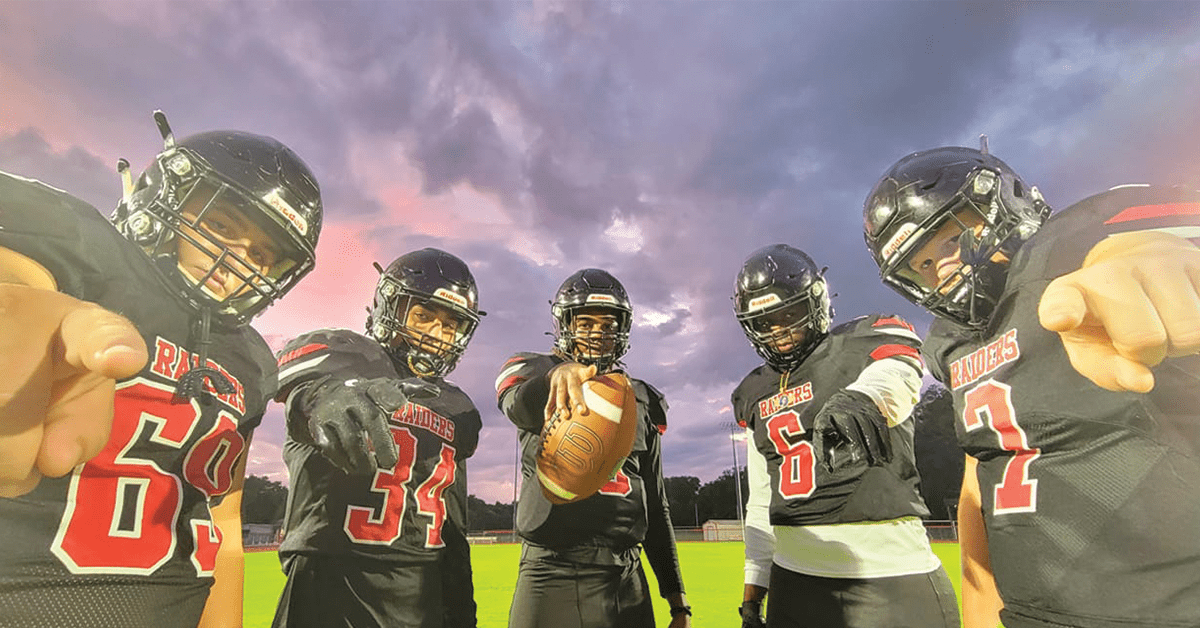 Defensively The Raiders finished strong. Senior Jawarren Corbin was one of the lead tacklers along with with Sophomore #42 Malakhi Boone. Both combined for over 130 tackles on the year. We also bid farewell to Senior Corner Back #26 Jaden Young who had 57 tackles this year and Senior Outside Linebacker #34 Fil Pedraza who finished with 51 tackles and let us not forget kicker Abisai Mejia-Lopez who finished with 57 total points this year a very respectable season for a kicker in this division.

We will absolutely miss this talented team of young men. They provided us with heart and soul that will be truly missed. 2024 looks up for South Sumter! They are returning many underclassmen who impressed this season so don’t be surprised if The Raiders are once again challenging to not only be district champions but make another run at the playoffs! We wish the Senior class of 2023 the best of luck as they finish their academic calendar year! Thank you Raiders! 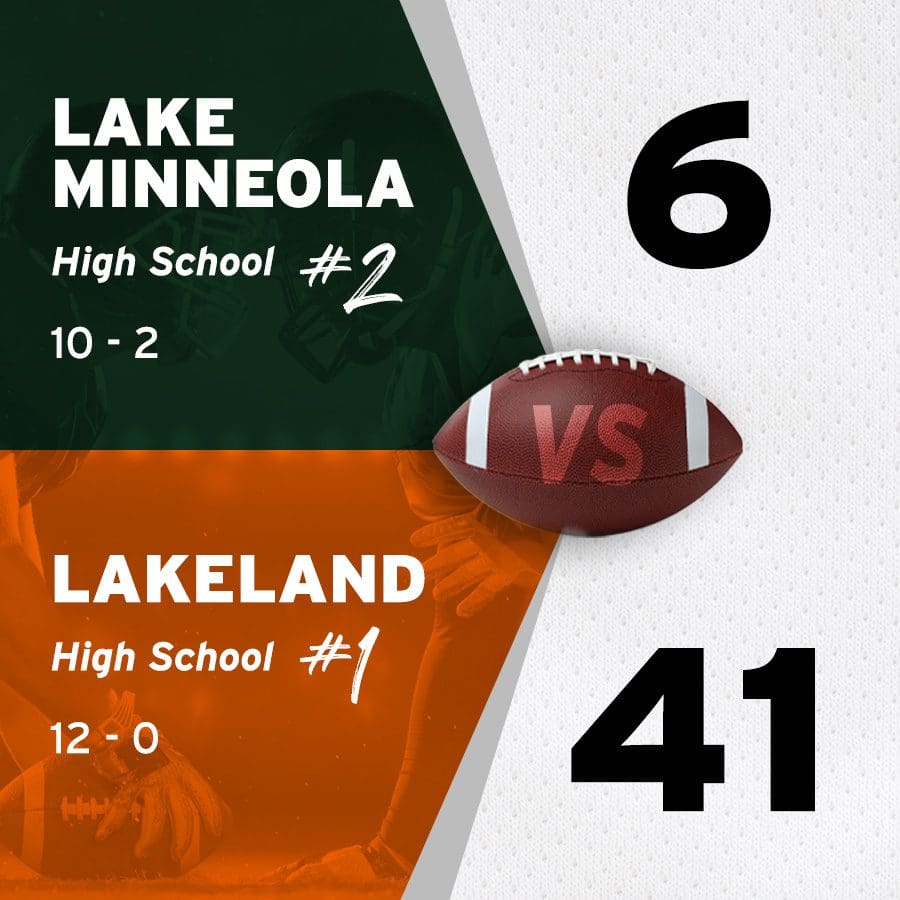 This game started with an absolute stunner as Lakeland intercepted a pick six thrown by Quinn Neimann and ran it back for a touchdown! That made it 6-0 Dreadnoughts. They would miss the extra point meaning the game was still only a six point lead. Lakeland won the toss and elected to receive the ball in the second half meaning they stole a possession away from The Hawks!

The Hawks didn’t seem rattled but on the very next possession another pick 6 lead to Lakeland running the ball into the end zone for their 2nd touchdown of the game! Lakeland lead 13-0 at that point. Coach Walter Banks was infuriated at his offense on the sideline and you could see the leaders of the offense trying to pump themselves up and try and forget what happened. 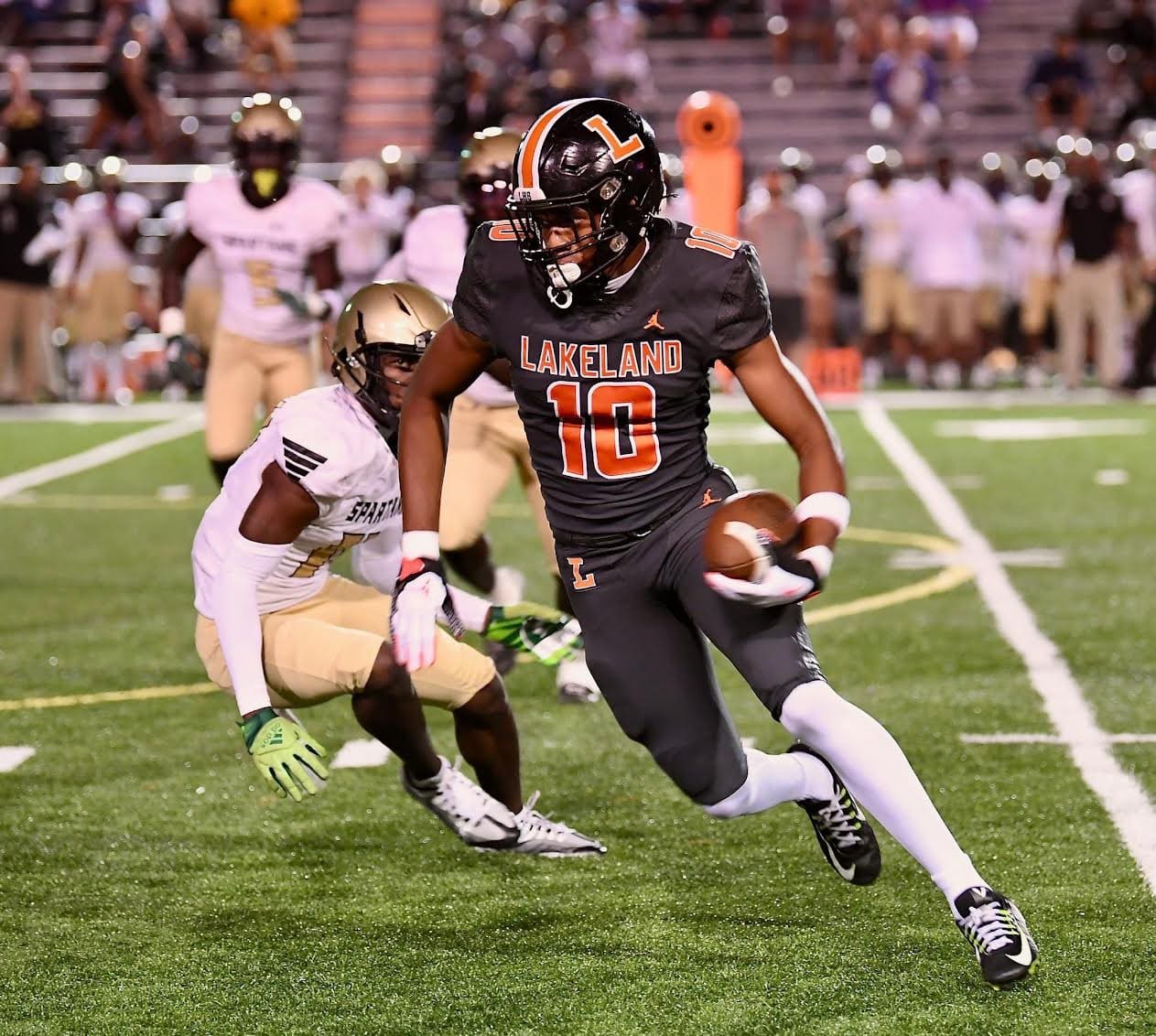 After all the offensive prowess of Lake Minneola is what got them this far! And as if this was right on schedule, The Hawks drove right down the field where RB John Celestin put the ball in the end zone as he’s done all season long. The Hawks had cut the lead 13-6 but The Hawks would miss the extra point.

Lakeland actually didn’t get a chance to show its offense for the first time until late in the 1st quarter, but when they got out there they looked amazing. Lakeland QB Zach Pleuss drove right down the field and Dreadnought RB #3 D’marius Rucker scored yet another touchdown. At the end of the 1st quarter it was 20-6 Lakeland. 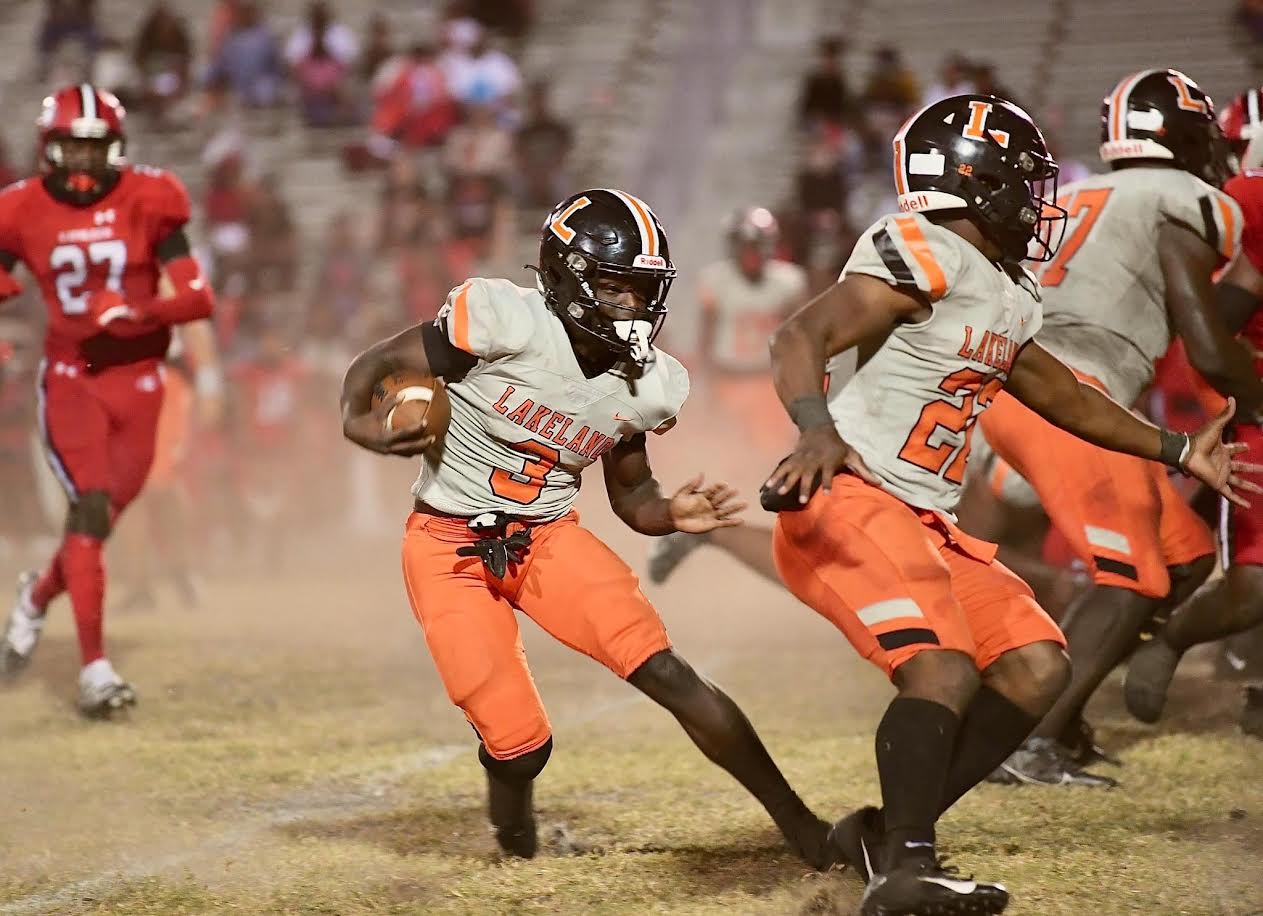 It didn’t get much better the rest of the half as the running backs for Lakeland were just too much for the defense of Lake Minneola to overcome. By halftime it was 27-6. Lake Minneola was going to need to find some answers quickly during halftime as this game was getting out of control.

Lakeland started the second half just as they left off in the first by driving the ball down the field and scoring another touchdown which made it 34-6. It was at this point you could really see the panic on the faces of the Hawks sideline. There was clearly a realization that we need to score or the season could be in jeopardy.

As they have done all season long the leaders of the offense Quinn Neimann and John Celestin rallied the troops in an attempt to mount a comeback but it was just too little too late for the Hawks, Lakeland pulled away in the second half and by the start of the 4th quarter we had a running clock due to FHSAA rules. Lakeland won the game 41-6 and moves onto the State Semis where where they will take on Bucholtz. 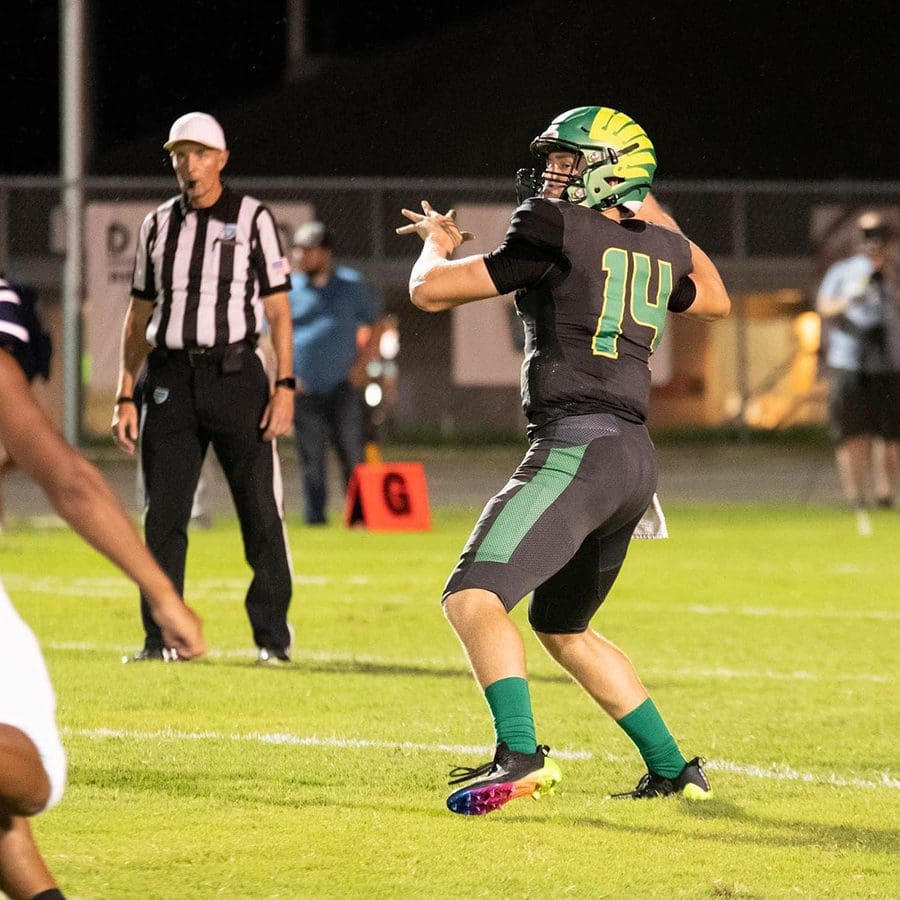 The Hawks finish the season 10-2 on the season. We can be proud of so much of what this team accomplished. Not only the offense but defensively! Although The Hawks found themselves outmatched in this contest they truly made everyone in Lake & Sumter County proud! They were only one win away from a State Semi Final! What a run it’s been!

Some of the highlight players this year obviously have to be Senior QB Quinn Neimann who threw for over 2,000 yards on the year while adding on over 23 touchdowns. Meanwhile Senior RB John Celestin finished the year with over 30 touchdowns and 1600 yards on the season. Elsewhere Senior WR David Ramos finished the season with 19.1 yards per reception which lead the team. Braylon Knauth will return for his senior season next year and we are excited by his abilities he showed this year.

Hawks Senior defenders Miles Mitchell finished as the sacks leader along with Junior Andrew Bowles who finished as the leader in overall tackles on the year and we look forward to great things from Bowles and the returning class of 2024.

Well thats the end of the season for The Hawks they gave us so many fun memories this year! We will really miss writing about such outstanding young athletes who have absolutely entertained all of us this season. We wish the senior class of 2023 the best of luck on the remainder of the academic year and we can’t wait to see what coach Banks can bring to the table next year!

That’s the end of the Lake & Sumter County Football seasons folks! Although it’s over for all our teams we want to congratulate all teams for making it this far especially South Sumter and Lake Minneola who nearly made it to the State Semi Finals! It has been a tremendous season for so many including an appearance by Eustis in the playoffs for the first time and many years and Mount Dora having it’s first winning season since 2014! We cannot forget about the Wildwood Wildcats who were eliminated last week but they also had a very successful season!

Now begins the offseason for these teams! Which programs will impress us next season and which programs will make it to the playoffs? Time will tell! We will have a breakdown of all the super bowl matchups when we know who are playing in them. Keep and eye on max preps for the latest information and the FHSAA website for the football brackets. 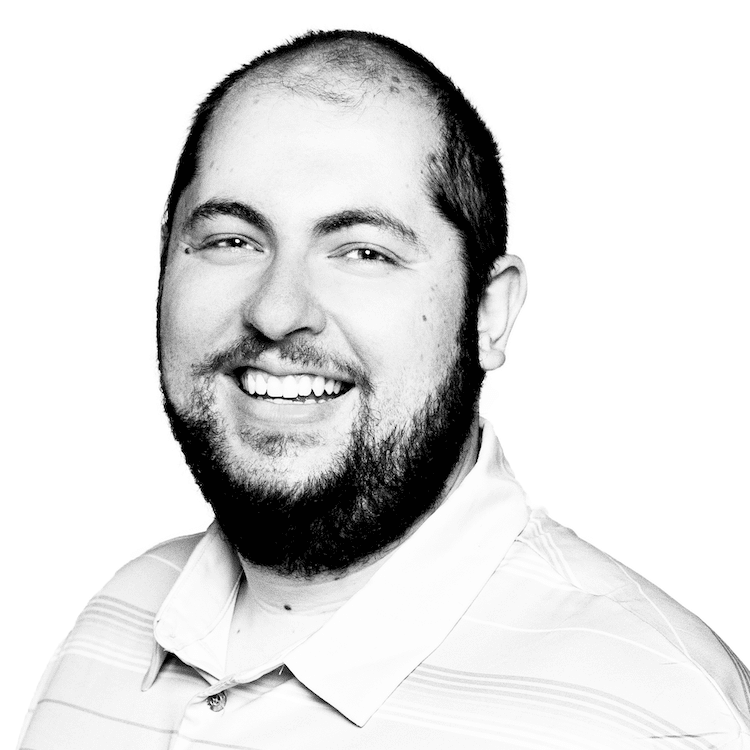 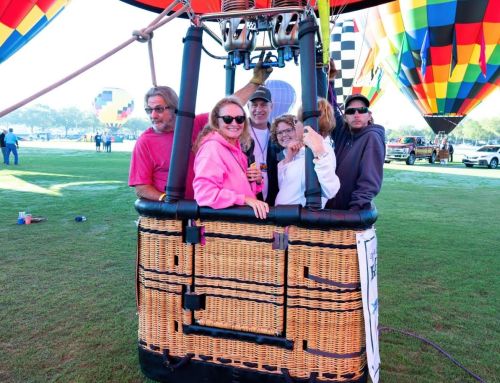