On the fast track

On the fast track 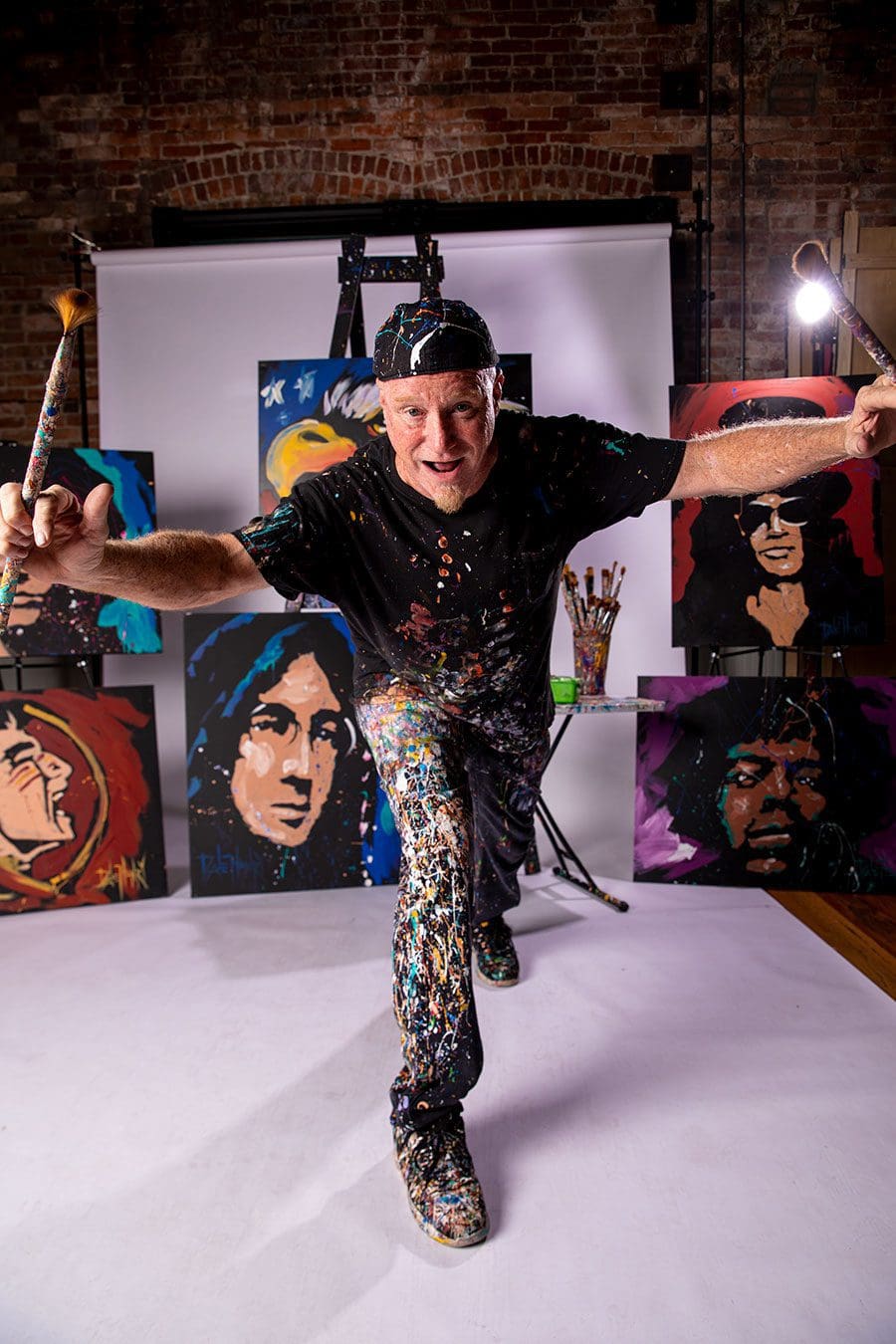 A Lake County artist finds success and happiness showing off a splashy and rare art form that wows and inspires.

Face-to-face, Dale Henry is a relatively quiet, laid-back guy who loves to paint and who dabbles in music and classic films, but get him on stage and he creates a spectacle.

“I hear people say all the time, “Man, I’ve never seen anything like that,” says Dale, also known as, Dale Henry Paintman.

Dale, a performance speed painter originally from Arizona who resides in Lake County, has wowed audiences all over the country with live stage performances fabulously choreographed to music, lights and deliberately huge paint strokes that end up one-of-a-kind paintings.

And unlike other more traditional artists who may ponder endlessly on what colors to use or certain fine details in their paintings, Dale has no time for that. He usually completes each work of art in just minutes after dipping brushes in colors he decides on in the spur of the moment, painting double-fisted, creating quick lines and layers without pause, tossing and twirling his brushes, splattering paint colors for embellishment, and oftentimes, starting out with his canvas upside down atop his easel.

And just when it looks like Dale’s been painting abstractly, a dramatic flip of the canvas reveals masterpieces of famous people and things like an American Eagle, Lady Liberty, the Joker or the Mona Lisa, a Florida State Seminole, Johnny Depp, Tom Petty, John Lennon, Elvis Presley, Marilyn Monroe, Willie Nelson, Einstein, John Wayne and many more.

No matter the subject however, the commonality is that in the end, each painting elicits cheers.

“It’s the closest thing to being a rock star I’ve ever experienced,” the Paintman says.

Dale has been an artist all of his life. He remembers drawing and painting from his childhood to his teens, but in his 20s, he made a career of painting and hand-lettering billboards and signs, pre-cursor to vinyl sign makers.

Dale then turned to illustrated buses and traveled the world doing vehicle airbrushing, but when vinyl wraps overtook that market too, he turned to interior and exterior murals for his business, including working with the Villages – starting with the bridge in Spanish Springs – painting in Central Florida and beyond.

In between commercial work, Dale traveled the country displaying fine art pieces at various art shows, and that’s when he found his calling. 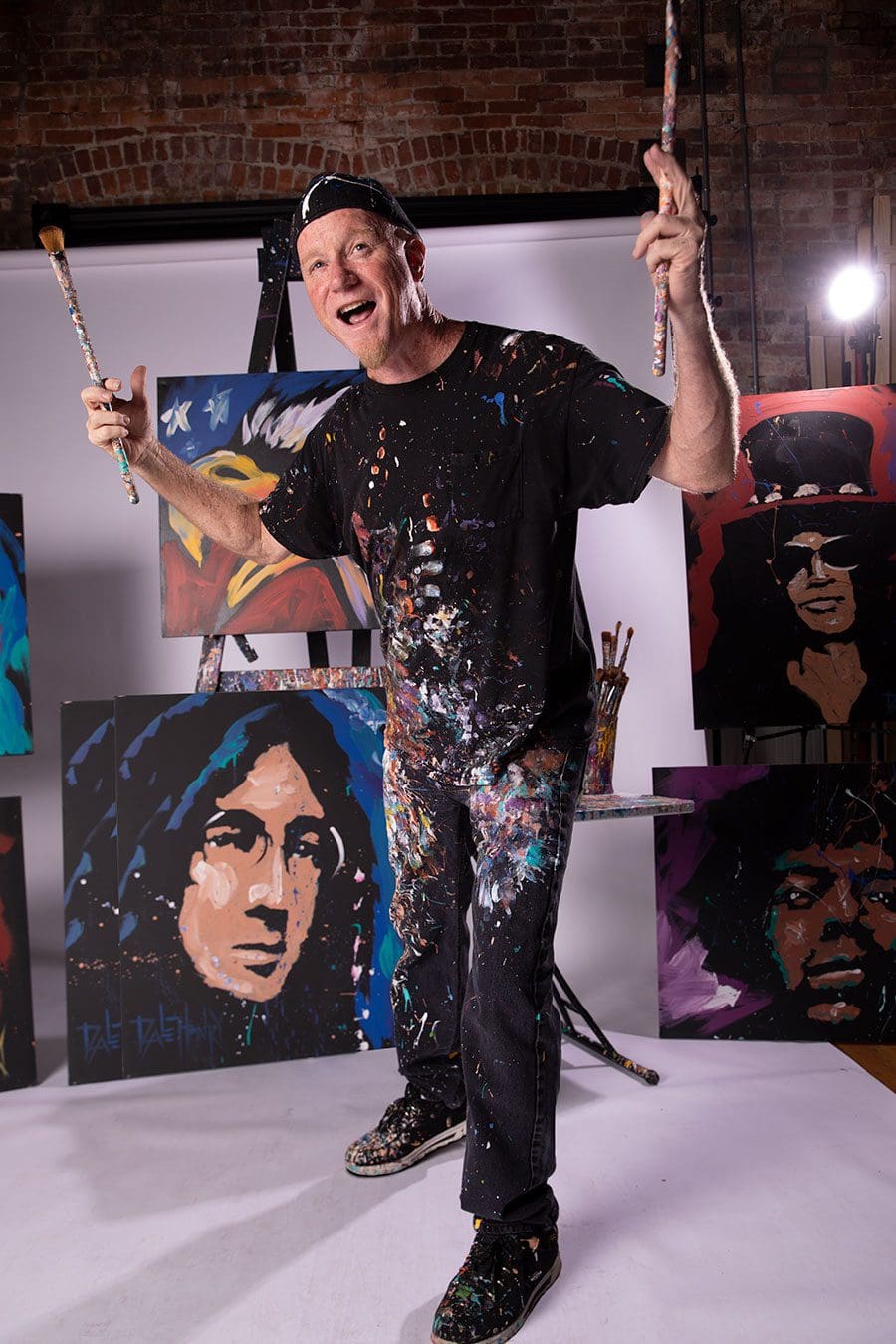 “There was an art show in Las Vegas where I witnessed a speed painter and it lit a fire in me and I said, “Man I can do that,” Dale says. “I came back to Florida and started trying it and realized, “Whew, this isn’t that easy,” but I taught myself a technique and just kept working and working at it.”

Dale says he did one free show for a friend, just to see if he could pull it off publically, and recalls: “At the end of it, the whole place went wild and I realized, ‘This is it, this is what I’m going to do.’”

Since then, Dale has done shows at yacht clubs, convention centers, at local and national event stages, including Leesburg’s BikeFest, the MGM Grand in Las Vegas and Princess Cruise Lines, not to mention, many charity galas where his paintings are auctioned for top-dollar to raise money for various organizations and causes.

Thus far, Dale’s biggest show was at Madison Square Gardens in September, 2014, during a visit by India’s then brand new Prime Minister Nerendra Modi, and where in front of about 20,000 people, Dale painted the honored guest’s portrait.

In 2020, however, the coronavirus pandemic brought everything to a halt and today, Dale is slowly getting back into full swing. He traveled to Chicago for a show in August and painted the outside and inside murals for The Amsterdammer, a new Dutch-inspired tavern in downtown Leesburg.

Dale’s paintings adorn the inside walls of the place and people can purchase his works, but what Dale wants most is to resume traveling and interacting with people on stage.

Dale says while his shows create intrigue and excitement for audiences, they feed his soul with satisfaction and joy.

“When I’m on stage, all I’m thinking about is the music, the vibe, the artwork, the time, everything. When I’m in my element, it becomes a flow, you just get into a groove and you enjoy it completely,” Dale says.