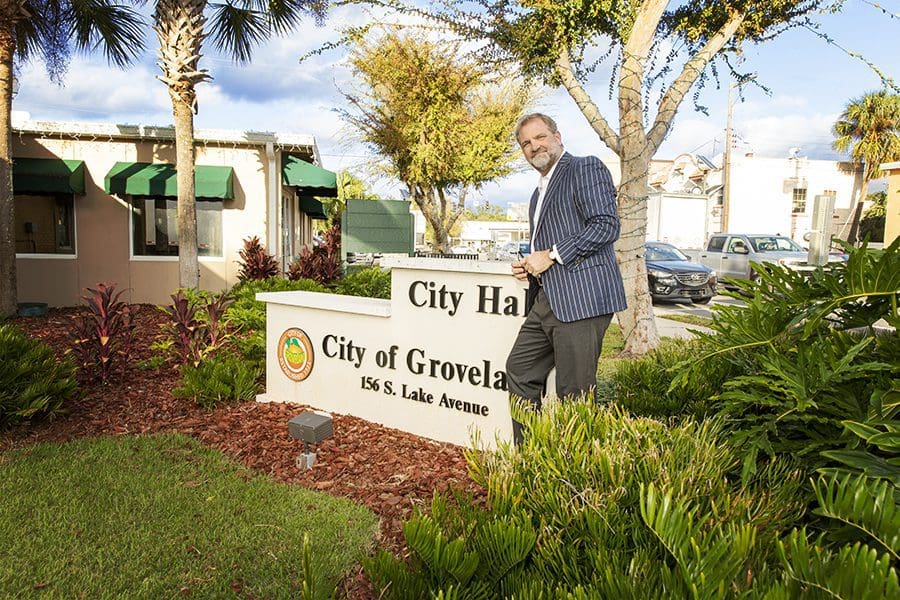 You formerly managed Tucson, Arizona; population 500,000-plus. How does that compare to managing a small community?: All communities are comprised of people with unique cultures and histories. Successfully managing a municipality requires that one learn, understand, and embrace the past as well as the future. I’m particularly fond of medium and smaller organizations because it affords the opportunity to get to know the employees and the citizens to a much greater extent. Otherwise, the scale between managing an organization of 120 employees versus 6,000 isn’t that much different.

It is relevant to note that I had the privilege of managing the town of Marana, Arizona. At the time, it was the fastest-growing community in Arizona. Marana’s motto was “Come Grow with Us,” and it was converting from agriculture (cotton) to residential and commercial. There are striking parallels between where Marana was as a community and where Groveland is from a development standpoint.

What brought you to Groveland?: I came to Florida to support my wife’s career path. She is the executive director of the new Sarasota Art Museum currently under construction with Ringling College in Sarasota. I was looking for a challenging position, and an executive search consultant reached out to me and asked me to visit. Once I met the people of the community and within the government, I was just inspired with a sense of incredible possibilities and optimism. Shortly after I signed on, that was reinforced by the incredible ethic of the employees and examples like Ms. Hope Brownlee, who single-handedly installed a little library and has maintained it for the community.

New projects in Groveland?: The community is poised to break ground on three significant capital projects that have been in the works for a number of years. The mayor and council will start construction on a new park on Wilson Lake Parkway and a new public safety facility on State Road 50. Also, improvements to Lake David Park will get underway. Not only is the community going to see physical improvements, the community will engage in conversations about the future and see a community committed to the environment and inclusive participation.

Long-term goals for the city?: My long-term goal is informed through conversations with the mayor and council and citizens. The collective vision of Groveland is to be the city of choice for those who value economic, social, and cultural success through the celebration of Groveland’s history, natural beauty, diversity, and community engagement.

Do you have an idol among government leaders?: There are many who have served with humility and dignity. One that in particular comes to mind is (Marana) Mayor Ora Mae Harn. As an elected official and a citizen, she consistently, and quite consciously, sacrificed her personal interests (and re-elections) for the benefit of generations she never would have the opportunity to meet. I also include the numerous citizens that took time and courage to vocalize their thoughts, as an engaged community inspires the leaders who represent them. For anyone who says, “a person can’t change City Hall,” they haven’t tried.

Better barbecue—Arizona or Florida?: Well, Florida, of course! But, Arizona still has the Sonoran hot dog, which simply cannot be beat among culinary treasures. Both states share commonalities and have been positively influenced by their Hispanic-era histories, and extraordinary food traditions are certainly no exception.

Pet peeve: I find that a lack of gratitude contributes to less-appealing behavior among human beings.