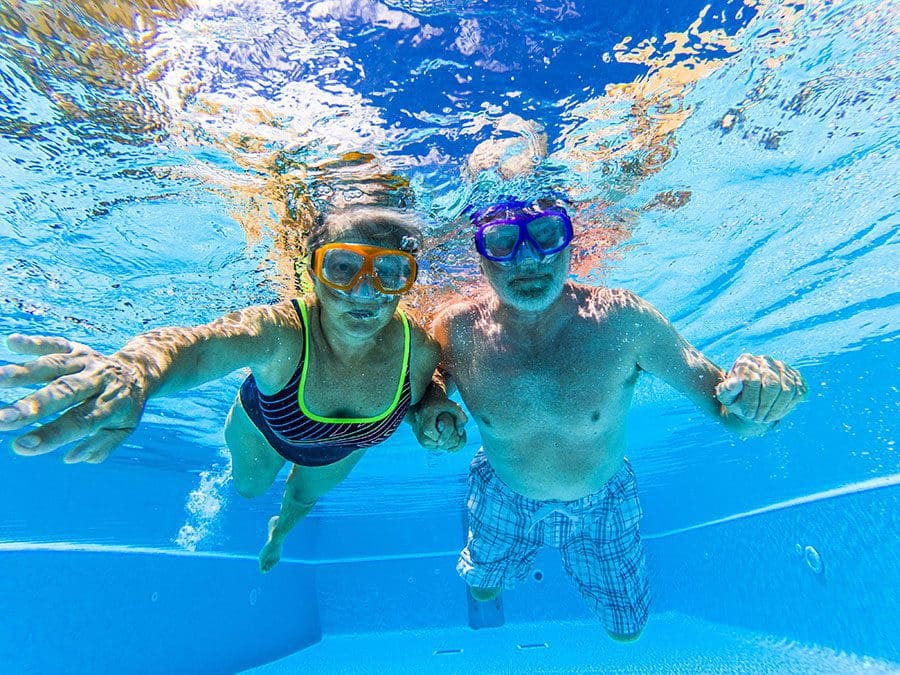 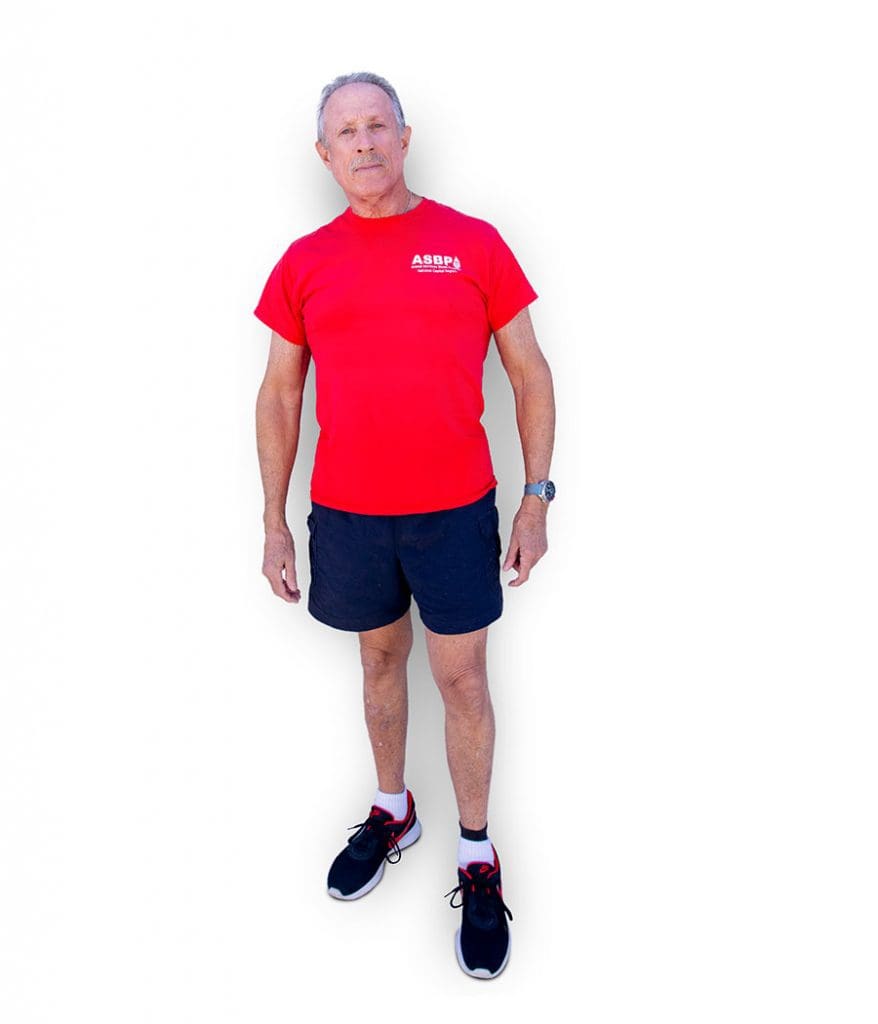 Failure’s not an option when Don Sheppard helps seniors drown their fears.

After 26 years working for the U.S. Defense Department, Don Sheppard the retiree is taking the offensive.

His battleground: the swimming pool. The enemies: fear of water and trepidation about learning to swim.

As a swim instructor in The Villages, Don has helped dozens of his peers win their own personal war since he began giving lessons through the retirement community’s enrichment academy.

There are no casualties in his classes, just success stories. Failure is not an option.

Even people held prisoner by trauma buried like a landmine.

“Most of the people I’ve had in my beginners class had something traumatic happen when they were young; like someone threw them in, they fell in, they almost drowned, and so forth,” Don says.

The scenario is all too common. Don would be rich if he collected a dollar from every dad who tossed their child into a body of water after telling them to ‘sink or swim.’ “That was a typical way when we were young,” says Don, who’s a millionaire in the currency of personal satisfaction minted by helping others.

Don has heard too many heart-rending stories since becoming an instructor in The Villages in 2016. 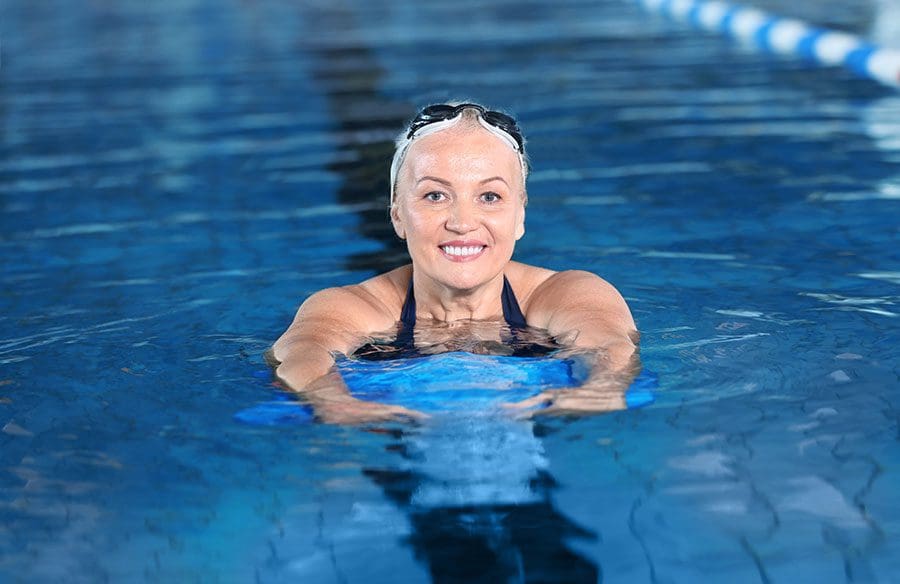 “I did have one fellow last year who came to my first class and he got in the pool and he started just shaking, just went into uncontrolled shaking,” Don says. “I just had him sit by the pool. I mean he was in a bad situation. I think his dad threw him in and he was panicking, and then he tried to get out and he pushed him back in again. So this guy had a panic attack.”

Don says that listening is the essential first step to teaching. “Everyone is different, of course.”

He limits his classes to six students at a time to ensure each student receives personal attention. And his approach isn’t the least bit complicated.

“The only tool I use is the kickboard. That gets them used to being horizontal in the water, gets them kicking and that’s what I work on too. And then we start going into learning how to use arms and go into full stroke.”

In some cases, Don doesn’t teach a single stroke. That was the case with the terrified little boy who was pushed back into the water. The man he became wasn’t ready to wage all-out war on his fears.

Don understands that some scars are almost too deep to be healed.

Don uses kickboards with beginners, but encouragement has been his No. 1 teaching tool since he earned a Water Safety Instructor certification in college.

“I’m always giving them good feedback,” Don says. “I take each person and tell them, ‘You’ve done this, and you’ve done this, and this is great. It shows what you can do.’ It’s about being positive and getting them to relax and make sure they have fun with it. Once they start achieving things then they want to do more.” 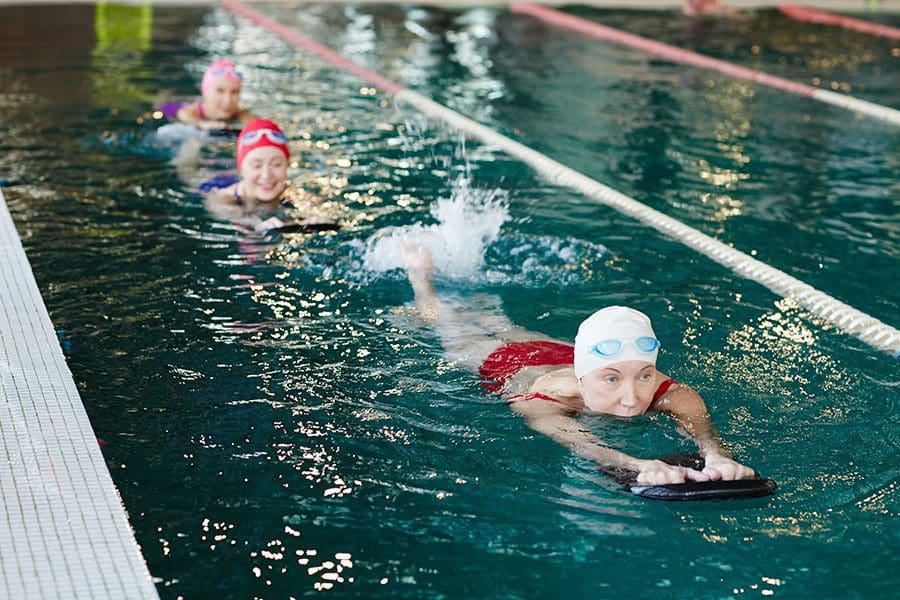 That certainly was the case with a woman who joined Don’s class because she was tired of her grandkids teasing her because she didn’t know how to swim. In just three lessons, Grandma achieved her goal of swimming the length of the pool. Don was with her every stroke, walking alongside the edge of the pool. “I gave her a high five and said, ‘Why don’t you go call your grandkids?’ And she said, ‘I am!’ She was so proud of herself.”

Don, who grew up in the Bahamas and learned to swim when he was age 4, was nearly as proud.

“When I see that look on their face after they’ve done something they’ve never done before, it’s just amazing. I tell them, ‘Now you can go home and have that second glass of wine because of what you did.’ It’s just a great look to see on their face and I enjoy that. I just enjoy seeing people truly achieve, and especially at this age. They’ll say, ‘You go me to do something I never did before,’ and I’ll say, ‘No, I didn’t, you did it.’”

There have been just as many success stories in Don’s advanced beginners’ classes.

“One lady could barely swim the length of the pool but was exhausted because she didn’t know how to breathe and her stroke was inefficient. So I worked with her. One day over at the pool, she came over and said, ‘I just swam 800 yards.’ I said, ‘Why didn’t you do 1,000?’ and she said, ‘Yeah, OK.’ A little while later she came back and said, ‘I swam 1,000!’”

With beginners, deep-seated fear is the biggest obstacle. Don spends less time on psychology and more time on technique with advanced beginners.

“When I’m with advanced beginners I’m in the water with them suggesting what they need to do to be more efficient. Once I get them to do that, then their distance starts increasing.”

And their confidence grows with each yard.

“The year before last, I had a husband and wife. He was a little bit ahead of her and she was very afraid of the water. I got her to swim about 20 yards out and he told me, ‘She is so happy because she’s never done that in her life.’”

Whether someone has a goal of 20 yards or 1,000, Don displays patience and compassion. And encouragement.

“It’s never too late to learn. You’re never too young and never too old to learn,” he insists.

That’s no cliché. Don has experienced the truth of that adage while teaching infants younger than a year old, and later, their great grandparents. 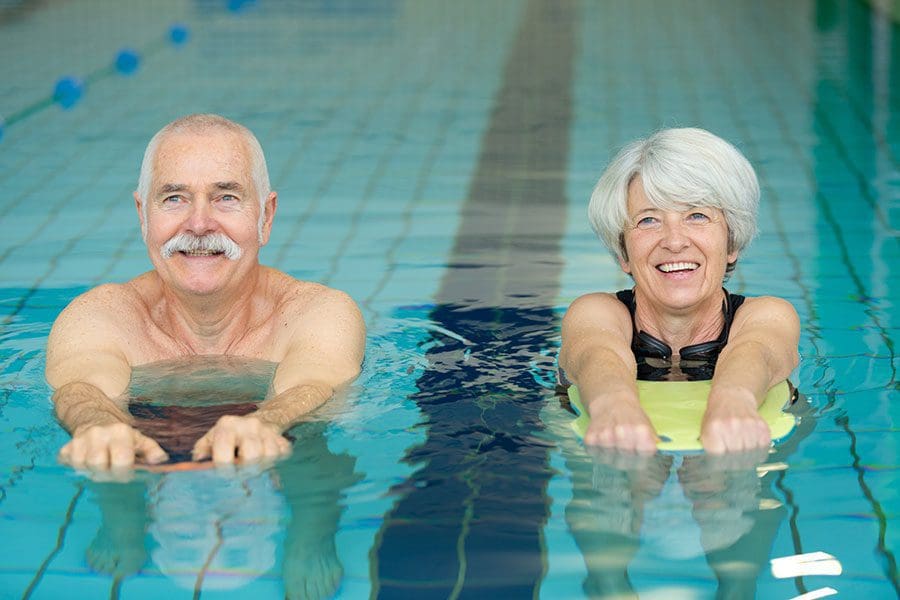 Don says the babies are much, much easier to teach.

“I’m dealing with adults here, and some have had a very bad experience and it affects them quite a bit,” Don says. “Babies have no fear of the water, because where was their first nine months spent? In water. Kids are easy for the most part because the fear comes from the parents.”

When asked what age is ideal for children to learn to swim, Don replied, “I’d say the earlier the better. I tell people if you can get your kid to swim class between 3 and 4, before 5, that’s the best thing.”

And throw away those water wings. “Water wings give a false sense of security if you’re not watching them someday. What happens when your kids are playing with some other kids who can swim and they see them jump in the water and they jump in after them and don’t have their wings on?” Don asks. “Water wings are the worst things you can do for your kids. They become dependent on them, so after you teach them you have wean them away from them.”

Villagers, be forewarned, Don will share his opinion if he sees your grandchildren wearing water wings. Keep in mind that he means well, he doesn’t mean to be offensive, it’s just that, well, he’s on the offensive.