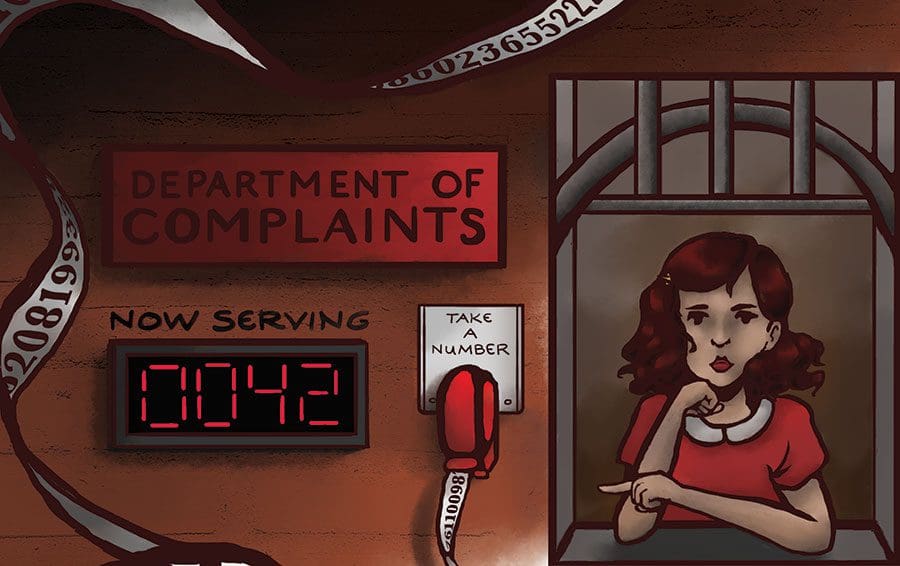 If you’ve got a complaint, take a number.

Everyone probably has gone through this at one time or another: You find yourself trapped in a situation with someone who complains about everything—every last occurrence and incident and detail in their life. It’s too hot. It’s too cold. It’s too loud. It’s too quiet. My wife is leaving me. My wife won’t leave me.

But the worst part is, I realized I come from an entire family of “that guys.” So I did a little Googling—I didn’t break my back, like I don’t have enough to do already?—and I found that some behavioral traits are genetic. Maybe complaining is just in my blood, and the complaint gene can be traced back to early man.

“Oh, sure, they invent fire, but they don’t tell you not to put your hand in it. Fire should come with an instruction manual. How do I know what temperature is right for cooking woolly mammoth? And when are they going to get around to making a decent wheel? They can put a man in a cave, but they can’t make a decent wheel!”

The world of psychology explores different types of complainers. Chronic complainers are never satisfied with anything. That could be stated better, but I’ll let it go.

Venters have an agenda, are focused on themselves, and want attention and validation from a confidant. Surely, you agree with what I’m saying.

Instrumental complainers pose solutions to their complaints, like kindly telling someone where they can go, informing them that their head is currently stuck in an unusual location, or suggesting that they should try a new physical position.

One theory of complaining states that the “Law of Attraction” brings more things to complain about into our realities. In other words, complaining breeds complaining. It becomes a never-ending cycle and commonplace complaints become a negative daily mantra.

That’s true. Think of the many topics that almost all of us complain about on a daily basis: traffic, bad drivers, the news, customer service, rude and inconsiderate people, and on and on. And who doesn’t complain about their bosses? Don’t get me started… (Editor’s note: A large section of this column has been redacted due to offensive language.)

Those behavioral researcher types suggest a solution: if we stop complaining, the cycle can be broken. Well, isn’t that sugar and spice and everything nice, all wrapped up in a bow with a cherry on top (don’t complain about the mixed metaphors). We’ll just stop complaining. It’s so easy.

I won’t ever again complain about drivers who don’t signal, or people in fast cars who drive too slow, or fans at concerts who won’t shut their yaps, or my neighbor’s yapping dog, or always needing to make three calls to correct errors on my TV bill, or how people overuse words like “icon,” “legend,” “amazing,” and “awesome,” or the fact that humans spend an average of 26.3 years of their lives waiting in lines (I made it up, but who’s complaining?), or that the world is going to heck in a handbasket. Yes, I said heck.

That’s just the absolute, perfect solution. And the sun will shine down on us every day and we’ll all live in Rainbowland, and yes, I know there would have to be rain amid the sunshine to create the rainbow, and I can’t even end on a good rant. Damn, this column sucks.

Not that I’m complaining.