A stretch above the rest 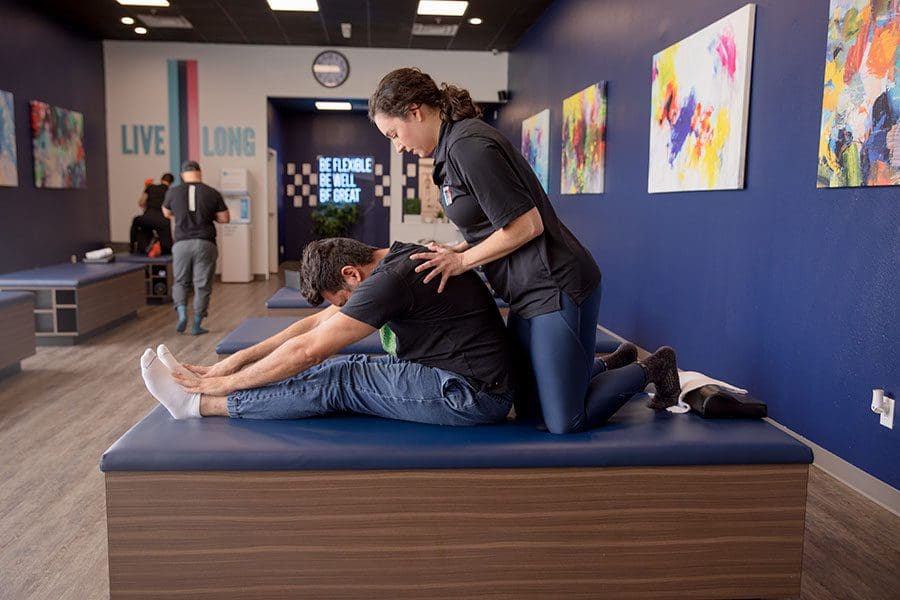 A stretch above the rest

Volkan Ulgen was accompanied to a comfortably padded bench, where he was told to lay down on his back with his head atop a small pillow.

That’s when Madison McGrew kneeled next to him, grabbed his leg and pushed it up and back all the way to his head, leaned into his hip, twisted it from side to side, pulled on it with strength and precision, then did the same to his other leg.

No, Madison was not torturing Volkan. She was stretching him; or rather stretching muscles a specialized mass machine identified as stiffened, tight, overly or rarely used.

At StretchLab – a one-on-one assisted stretching studio in Clermont – flexologists like Madison use information from a state-of-the-art machine to assess problem areas and customize individualized stretching programs for each client.

“Stretch me away,” Volkan says with a smile before his first-ever assisted stretch session. 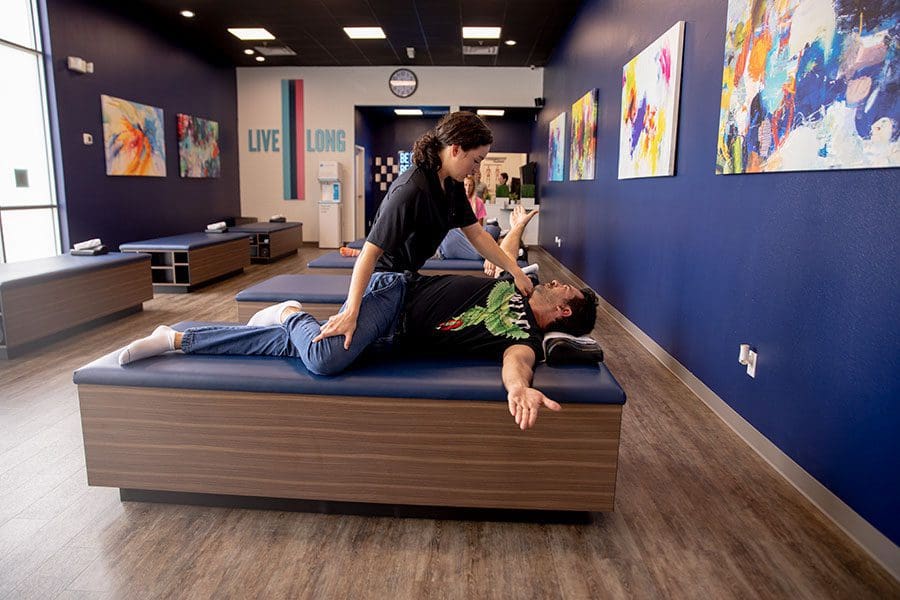 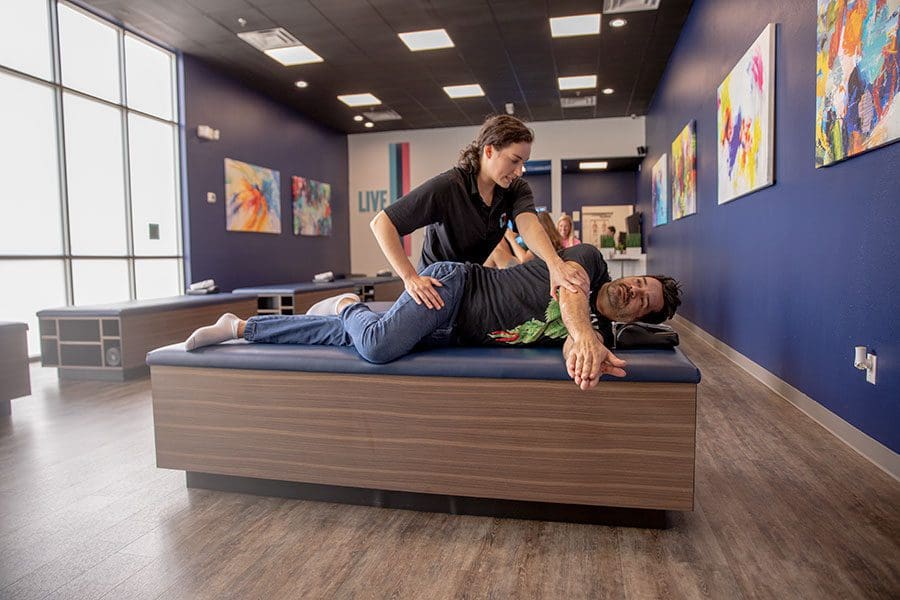 According to many online health resources and StretchLab owners Walter and Rhiannon Rogers, stretching has more benefits than people may realize.

It can improve posture and range of motion, decrease back pain and muscle soreness, increase blood flow to muscles, and relieve stress and help prevent injury – if you know the proper techniques.

Because of that, the StretchLab employs franchise vetted individuals with degrees in areas of body mechanics and movement like kinesiology and sports medicine, or who are certified yoga or Pilates instructors, professional dancers and others with like experience or interests. Those individuals then undergo 120 hours of training in Stretch Lab modalities to become Stretch Lab-certified flexologists at your pulling, twisting, lengthening, get you moving better and able to touch your toes, service.

“The idea behind stretching and what everybody tends to forget about stretching is that it’s about flexibility, it’s about mobility, it’s also about prevention and giving you back some mobility, plus it helps with your blood flow and keeps your muscles from atrophying,” says Walter Rogers, who along with wife Rhiannon, own the first studio of its kind in the area.

“If we can help you from getting hurt, it’s going to improve your quality of life to begin with,” Walter adds.

Walter and Rhiannon have remained excited about getting to know and help people since opening their first StretchLab studio in November 2020 after months of delay brought on by the coronavirus pandemic.

The pair is also psyched about being able to show what StretchLab can do, and all because of Rhiannon’s personal experience with how it helped her.

“We want to let people know that there are different options for relieving pain or stress in your body and stretching is one of them,” Walter says. “Once people’s needs are assessed, it’s the consistency of what we do next that helps train your muscles more long term.”

For years, Walter, an accident and injury attorney, and Rhiannon, a criminal defense attorney, considered delving into other ventures.

In 2019, after Rhiannon was involved in a serious car crash that left her with herniated disks in her neck and lower back, a broken clavicle, a broken toe and more, a new venture kind of found them.

After the crash, Rhiannon, though thankful to be alive, was plagued with things like neck and back pain, stiffness, shakiness in her hands, and loss of overall flexibility that were negatively affecting her quality of life. Chiropractic treatments and clavicle surgery gave her temporary relief, but lasting improvements were minimal.

Walter says a friend told him about assisted stretch therapy – an up-and-coming form of treatment usually reserved for elite athletes and the rich and famous that was gaining popularity among the general population.

The Rogers wanted to try it, even though doing so meant flying to Laguna, California, where boutique fitness studios devoted to stretching were plentiful.

“After landing, we got 50-minute stretches, then following those stretches, I got off the bench and I was floating and I just felt like ‘Man, this is great,’” says Walter. “Then, I looked over at Rhiannon, and I get chill bumps every time I talk about this, but she moved her body a couple of times, then reached over and touched her toes – the first time she’d been able to do that since the crash.”

Rhiannon says that moment was a life changer.

“After being stretched, it was the first time in nine months I’d been able to touch my toes, but also the first time I felt that kind of relief,” she says. “It’s why we decided to invest in the company, but also, continuing with these stretching sessions has helped me both physically and mentally.”

She continues: “The same way people have a mental clearance when they do yoga or participate in some sort of physical activity, this, for me brings mental clarity, as well.”

Walter says they visited the owner of Exponential Fitness, who owns StretchLab and other franchises under that umbrella, including Club Pilates, Yoga Six, AKT, Pure Barr, Stride, Rowhouse and Rumbler.

“That’s how StretchLab was born in this area,” Walter says, explaining that he and Rhiannon have plans for more studios throughout Central Florida and in Pensacola.

There are also StretchLab studios owned by other franchisees in Winter Park and Orlando.

“For now, we have this one and when people say, ‘Why Clermont?’ we tell them it’s because we think it’s a great community and this is the first location we decided to develop,” Walter says, adding that they live in Ocoee but have been coming to and hanging out in Clermont for years.

Walter says they’ve made many friends in town, adding, “I even get my hair cut in Clermont.”

Since opening last fall, dozens of people who’ve come through the Clermont StretchLab doors can attest to the benefits of stretching and the relief it’s given them, in more ways than one.

“Our members run the gamut, whether they are 90 years old and they are coming in because they just want to remain active and have some sort of mobility, to a 6-year-old competitive gymnast or dancer who Is wanting to work on their flexibility and really push the limits of a body that’s still maturing,” Walter says.

Volkan says he felt results of his stretch session instantly, and that its effects were long lasting. He also says that although he usually has trouble getting out of bed in the mornings without stretching for several minutes, getting up the next day after his initial stretch was a piece of cake.

“You’ll see a number of people coming through here from all walks of life. We have kids who are gymnasts and others who are dancers, all working on their flexibility, working on injury prevention. We have baseball players, weekend warriors, people in boot camp, we have triathletes, runners, but we also have grandmothers that want to be able to pick up their grandchildren or reach above and be able to get something out of their shelves that are over their head, and grandfathers who just want to be able to tie their own shoes and stop wearing slide-on shoes all the time,” says Walter.

Those personal testimonies mean the world to Madison.

“I can’t say I can fix everything, but if I can help a subsection of the population with stretching and recognizing that stretching is what they need, then that makes me feel satisfied,” Madison says. “We see a variety of people, and of course different people need different things, but I do believe everyone can benefit from stretching in some way.”

Madison, who has a master’s degree in dance science, is also a certified personal trainer and professional dancer. She says though stretching is an everyday part of her world, most people go about their everyday lives without thinking about it unless there’s a problem and are told to do it.

She says becoming a flexologist with StretchLab has empowered her to spread the word about the importance of stretching.

“The fact that stretching had been my life up until this point, I thought it was absolutely something I could get behind,” Madison says. “Also, I came into it with the knowledge that stretching is not only inherent to dance, but that stretching might actually eliminate, if not manage, a lot of syndromes we’re seeing.”

Madison says many people work in jobs that involve a lot sitting in front of computers, which results in hunchback postures, so stretching would be a great benefit for them. But she says it can help people of all ages and professions.

“We see older clients, but then we see professional athletes or people who sit in front of a computer all day, too, so it’s just really rewarding to use something selective like this and have it help so many people,” she says, explaining that of all her clients thus far, the one who’s impacted her the most is a 7-year-old with hip dysplasia who came in after being bullied for not being able to sit on the rug, cross-legged, with other students at school.

“She had three surgeries and spent the past three years trying to get to the position where she could sit criss-cross applesauce and now, just three months after starting here, she can do that,” says Madison. “It’s really nice to be to help in that way.”

For membership packages, individual pricing options, or for more information, call 352.404.8774 or visit @stretchlabclermont on Facebook or Instagram.