Fork on the Road: For hearty appetites 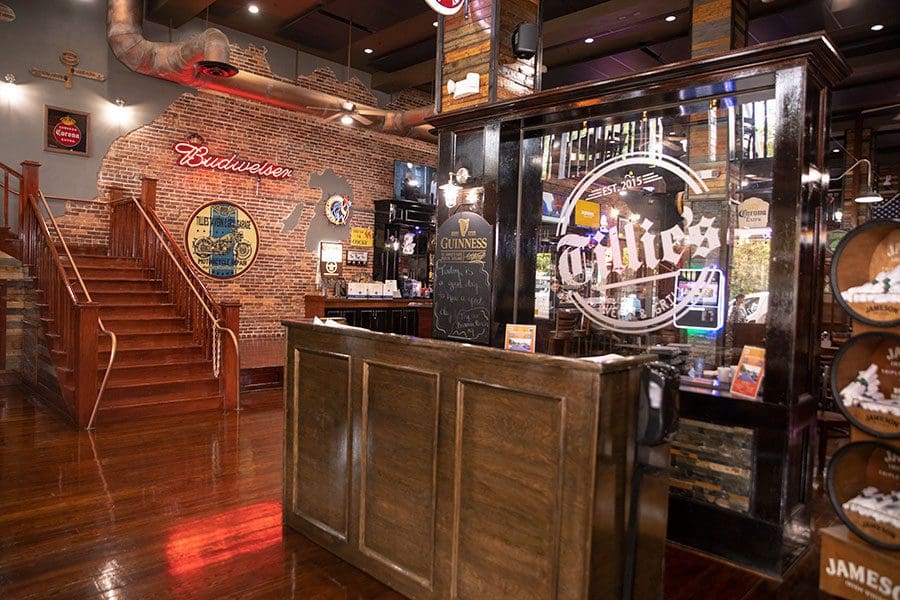 Fork on the Road: For hearty appetites

When eating at Tillie’s, prepare to go big or stay home.

Chefs have the reputation of being picky eaters. Take them to a restaurant and their attitude becomes as salty and bitter as the food they’re complaining about.

Tillie’s Tavern and Grill must be doing something right.

One of the restaurant’s frequent customers is Derek MacArthur, a chef at another Lake County eatery who recognizes good food when he tastes it. On days he is not working, he visits Tillie’s and satisfies his ultra-adventurous appetite with the seared ahi tuna and the shrimp Caesar salad.

“I come here several times a week for the beautiful food, great service, and awesome atmosphere,” Derek says. “The food is always fresh and prepared very well. Also, I appreciate how the staff treats me like family whenever I come here.”

That’s a glowing endorsement for one of Lake County’s most well-known restaurateurs, James “Tillie” Tilquist. Since age 22, James has owned eight restaurants and three bars. In addition to Tillie’s Tavern and Grill, he also owns PJ’s Chop House and CJ’s Seafood Company—all in Eustis.

The secret behind his success can be summed up in four words: “Low prices, big portions.”

Simply put, Tillie’s Tavern and Grill customers never leave hungry or broke. That’s especially true for those who order an appetizer featuring a new twist on an old favorite. Instead of the usual ground beef or chicken, the nachos come piled high with barbecued pulled pork, as well as tortilla chips, lettuce, tomato, onions, barbecue sauce, and three cheeses. This appetizer is large enough to feed two people, so anyone brave enough to go at it alone should prepare to take home leftovers.

Another popular appetizer has become a southern delicacy of addictive proportions. The fried dill pickle slices, made to order, are breaded and fried to golden perfection. The coating is not overly thick and adds a depth of flavor that complements the juicy pickle slice.

For those with hearty appetites, Tillie’s serves up a sandwich that’s larger than life—or at least the brioche bun on which it is served. Yes, the fried pork loin hangs excessively off the bun on all sides. In fact, it requires several bites before even reaching the bun. But the journey to arrive there is worth it because the meat blends well with tomato, onion, and lettuce.

Other Tillie’s treasures include the French dip sandwich with thinly sliced ribeye steak; the Pops burger topped with bacon, cheese, and grilled onions; and the Cajun chicken pasta with fettuccine noodles, grilled onions, and green peppers drenched in Alfredo sauce. Two people may be required to finish the aptly named Beach Ball sandwich, piled high with roast beef, turkey, and ham. A selection of burgers, salads, wings, and flatbreads round out the menu.

“The most frequent compliment I hear about our restaurant is the portion sizes,” says Tanya Catoe, who serves as district manager for all of James’ restaurants. “You pay $8.99 for an appetizer of mushrooms, and you have to bring 10 people to eat them all.”

Tillie’s Tavern and Grill opened in 2015. Last March, James moved the restaurant across the street, and his loyal customers followed. He has even gained a slew of new customers, some who come from as far away as DeLand and The Villages.

“We are truly one big family here,” Tanya says. “I can look around the room right now and I only see a few customers in here who I do not recognize. So many walk-ins here and we know what they’re going to order. The relationship we build with customers is unique.”

The new location not only serves up delicious food but also an important slice of history. Tillie’s is housed inside what used to be Ferran’s Department Store, which was built in 1884 by Edgar L. Ferran and clothed generations of Lake County residents for 114 years. At one time, the business was one of the south’s oldest independently owned stores.

Tillie’s decor bears a resemblance to Orlando’s Cheyenne Saloon, with winding, wooden staircases on both ends of the restaurant, beautifully finished wood floors, and exposed copper pipe tracing across the wall. The spacious interior also features a full-service bar with five television sets, as well as second-story, reservation-only dining rooms that accommodate parties of 20 or more.

Tillie’s Tavern and Grill provides plenty of reasons to visit: large portion sizes, deliciousness in the air from the parade of dishes coming out of the kitchen, eye-catching architecture and design, and down-home service from friendly waiters and waitresses.

Happy hearts and full bellies are the norm.